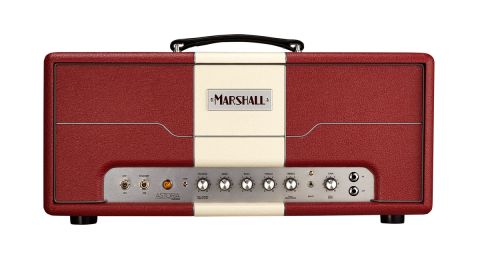 For a first entry into the crowded boutique sector, the Astoria takes some beating in the sound and build-quality departments, though it's far from cheap.

Excluding reissues and signature models, it's the first new Marshall range without the company's traditional livery: aimed squarely at the so-called boutique market, the Astoria range is named for the iconic London music venue that was sadly demolished in 2009 to make way for the Crossrail project.

There are three different models: the Dual, Custom and Classic, identified by blue, red or green vinyl respectively. All three amps use the same KT66 output stage, while offering slightly different preamp features. Here, we look at the Classic head.

The Astoria Custom's distinctive-looking red-and-cream vinyl cabinet is very much in line with most people's expectationsof a high-end boutique product, while remaining undeniably Marshall.

Combined with a colour-coded Marshall block logo and brushed aluminium control panels, old-style toggle switches and neon indicators, there are plenty of nods to Marshall's past, yet the overall look is refreshingly new without appearing contrived or gimmicky. The finish quality on the range couldn't be better: the vinyl application together with the tricky silver string detail work is perfectly executed and stands up to the closest examination.

Inside the powder-coated steel chassis, the electronics are an interesting mix of old and new, with a hybrid PCB that carries turrets as well as conventional PCB tracks. Non-audio components, such as relays, are conventionally soldered to the tracks, while those items in the signal path are hand-wired to the turrets for the highest integrity and reliability. All of the front-and rear-panel components are connected by flying leads, along with all the valve bases.

The Custom is a single-channel design with a footswitchable effects loop and boost. There are other distinctly boutique features, including switchable power reduction, a valve rectifier and a post-phase inverter master volume, with a tone control called Edge, which acts on the output stage and functions such as a Presence control, in the absence of a negative feedback loop. Other front-panel controls include gain, volume, bass mid and treble.

There's a power-reduction push/pull-switch built into the master volume control, which drops the Astoria Custom's output from 30 watts to roughly five watts, and a bright switch on the treble control. A third push/ pull on the gain control, Body, adds extra low-end punch.

On the back panel, there's a set of five loudspeaker outlets to cover most impedance needs, together with a send level control and a pair of send/return jacks for the effects loop. There's also a loop on/ off switch for occasions when the supplied two-button footswitch isn't in use.

Like all amps that have a valve rectifier, it takes a few minutes for the internal voltages to ramp up and stabilise. Once this has happened, the Astoria is remarkably noise-free; hum and hiss are practically inaudible, a sign of a well-sorted circuit.

With both combo and head/cabinet options available, we tried out a wide range of guitars and, used at lower gain levels, the Astoria Custom has the glassy, slightly edgy highs typically associated with KT66s, together with a very dynamic response, courtesy of the GZ34 rectifier valve.

Turn up the gain, and the Custom obviously gets more aggressive. However, the rectifier tames the dynamic responseto some extent, so it isn't as vicious as you might expect. There is a slight loss of definition at high-gain settings, accentuated if you hit the footswitchable boost or use the power reduction feature. However, this is probably taking the Custom outside ofits normal operation zone.

On-the-edge to medium overdrive tones are where the Astoria Custom excels, delivering superb blues and classic rock or pop sounds that easily evoke the golden years of the early 1970s. We ran the gain and master volume around halfway, using the guitar's volume control for rhythm/solo selection. Set like this, Mayall-era Clapton and Fleetwood-era Peter Green are almost too easy to conjure, with a singing, vocal sustain that clings to each note and refuses to let go.

The footswitchable effects loop works well with all kinds of pedals and rack effects - we used a decent digital-reverb stompbox and achieved very good results with the loop in parallel mode. We're particularly impressed with the Astoria's customised Celestion Creamback loudspeaker, which delivers plenty of volume with no nasty peaks and a consistently great tone over a wide listening angle.

There's practically no sonic difference between the combo and the head/cab outfit: the separate cabinet delivers a slightly more focused sound to our ears, with a touch more bass, but the chief differences are cost and portability.

While there's some stiff competition from some of the more established names, one thing they can't compete with is the badge on the front. Handmade in Bletchley and leveraging half-a-century of design and fabrication skill, it is a serious contender that deserves to be heard alongside the world's top boutique brands.

Given the choice between the head and the Astoria Custom 1x12 Combo, we'd pay the extra for the separates - yes, the combo is one box, but it's heavier and awkward to carry on its single handle.