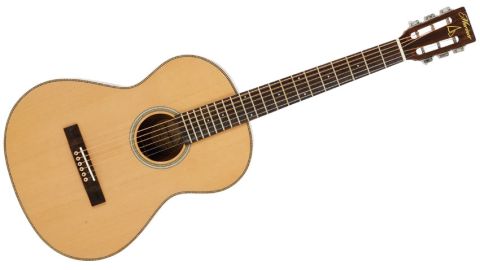 Mariner is still a new name in the affordable market, but the Capstan is a fine fingerstyle-friendly performer.

Numerous reviews start out from readers. One request for full-scale, smaller body guitars for use at home, for recording, practice or writing, but - an increasing caveat these days - affordable got us thinking. Dreadnoughts proliferate at every price point, but smaller body guitars are a rarer breed, and even then the emphasis in the past couple of years has been on travel guitars with smaller scale lengths.

One perennial style, of course, is the parlour guitar, loosely based on Martin's 0-style. Slightly bigger is the 00, which then grows to include things like the folk and grand concert - still small, but with more air.

Here, we have a new addition that tick these boxes. Mariner guitars are designed in the UK but made in China, and one of 2012's new additions in its Green Series is the Capstan, classed as a grand concert. This is an all solid-wood guitar using some unusual timbers.

Despite our small-body brief, the Capstan is fairly spacious. At 371mm (14.6 inches) in width and 487mm (19.2 inches) in body length, its grand concert design puts it into 12-fret Martin 00 territory. The 12-fret neck joint increases the body length compared to the 14-fret 00 style, and the roundness of the upper bouts makes it close to a modern classic guitar.

The top is solid spruce and finely grained, too; the back and sides are paulownia that's attractively grained, a sort of cross between the hue of korina and the grain of ash. With minimal cosmetic detailing, the body finish is a tinted gloss, giving a nice aged appearance.

Internally, things are fairly tidy, although, while the visible back braces are nicely sanded, those under the top seem rougher to the touch in pretty typical X-braced layout. The solid sides have small mahogany-looking side reinforcement bars, too.

Welcome here is the spacious nut width and 39mm string spread, with a slightly tighter bridge spacing of 54mm. It's got fingerstyle stamped all over it.

The satin-finish neck is one piece, save for the slightly mismatched single-piece heel stack, with an old-style quite deep C-shaped profile, slotted headstock and rather out of place electric-like Kluson-style tuners.

Another more electric-like feature is the slightly rough-topped wide frets. Nut and saddle are bone; the saddle is nicely compensated, although the bridge, with its pyramid-style ends, seems a little over-thick. Overall, though, at this price, there's a lot to like here.

The Capstan impresses with a crisply textured voice that sounds new and raw. It's well balanced, with roomy (but not boomy) low-end, strong but not over-dominant midrange, and reasonably powerful highs.

The wide string spacing of the Capstan, especially in lower positions, makes for easier fingerstyle, although the neck is pretty chunky if you're used to an electric neck. It's also quite chameleon-like: there's a raw blues edge to it, but its tighter bottom end would help plectrum rhythm styles, especially when playing with another guitarist or tracking on recordings. It sounds good with open and altered tunings, too.

Mariner's Capstan is a good addition to its evolving range. These guitars have their rough edges, but they also tick the green box. This one is very versatile, and would make a fine all-rounder, with the emphasis on the fingerstyle player. Add a soundhole pickup and it's a perfect open-mic guitar, too.