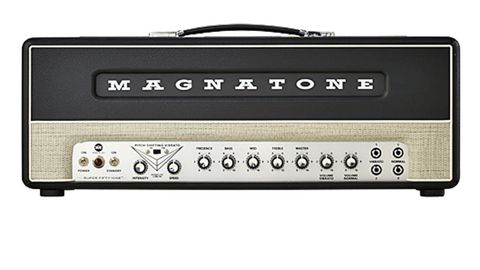 Stunning, tons of tone, and very expensive. If you can afford it, don't waste time: check it out now!

With Magnatone amps revived and shortly due to hit the UK, we're taking a look at the flagship Super 59 head and cab, designed with input from ZZ Top's Billy F Gibbons.

The Super 59 head has classy internals, with a large high-quality through-plated PCB holding the small components, while all the valve bases and control panel parts are hand-wired. There are 10 valves here, including a GZ34 rectifier and a 12DW7.

Every aspect of the Super 59 outfit looks right: from the radiused corners to the wraparound grille cloth design and illuminated logos on the head and cab, it's clear that no expense has been spared at any level to give the amp visual and electronic mojo worthy of the Magnatone name.

The Super 59 has two non-switchable channels, called normal and vibrato, with separate gain knobs feeding a shared EQ featuring bass, mid, treble and presence controls. The built-in vibrato effect can be switched from frequency to amplitude modulation and has controls for speed and intensity.

On the rear panel, there's a cool touch in the shape of an expression pedal jack, to remotely control the effect speed, along with an effect on/off footswitch jack, a pair of send/return jacks for the valve-buffered effects loop and a speaker-compensated line out.

The Super 59 is a beast. Like vintage Plexi-type designs, it has two permanently-on preamp channels, called normal and vibrato, which can be bridged with a short patch lead. Both channels have individual gain controls feeding a common EQ section and master volume. The vibrato effect appears on the vibrato channel, but in tremolo mode the effect works on both.

The effects are subtle and centred on the speed and intensity range most players want. Using a pedal to control the LFO speed gives very cool results: similar to a Uni-Vibe or rotary speaker, but with a more subtle result.

Perhaps not surprisingly, the Super 59's overdrive sounds are pure vintage ZZ Top - the Billy Gibbons influence is very apparent, and using our PAF-equipped Les Paul it's almost too easy to pull out off-the-pick harmonic squeals and double stops, along with all the other trick effects the guitar legend is known for.

There's plenty of gain, too; regular low-output single-coil guitars easily get decent overdrive sounds, but with a punchy bright humbucker the Super 59 delivers truly stellar tone. For American-flavoured blues and classic rock it's comfortably one of the best heads we've ever played.

Our only gripe is that all those sounds happen with the master on around six or seven, at which point the Super 59 is very loud. It sounds good at low volume, but absolutely phenomenal when cranked.

It's great to see this iconic brand revived with such impressive products, even though Magnatone may not quite have the same resonance here in the UK as it does in the States. Nevertheless, you're looking at a stunning amp from a manufacturer that we'd rate in the top 10 of the world's best amp producers.

The Super 59 could easily become one of the most aspirational amps of the decade for blues and rock players all over the world. Yes, it really is that good.

Excellence never comes cheap, of course, and the amp has a predictably jaw-dropping price tag. However, it's comparable to similar products from other top brands, so we'd say this Magnatone is actually very good value for your money - if you can afford it, that is!