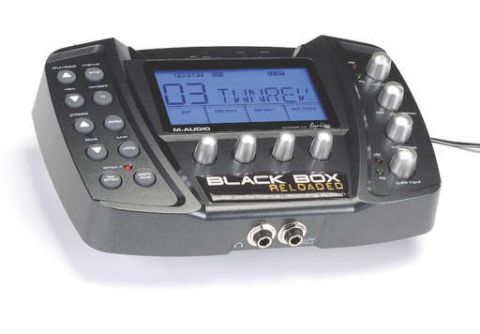 A true 'all-in-one' guitar recording solution that's ideal for guitarists who want to get into digital music creation.

There are several products on the market designed for recording guitar using a computer, but M-Audio has perhaps come up with the most enticing prospect yet with its Guitar Box.

It combines industry-standard recording software with a hardware USB audio interface packed with its own amp sims and effects.

What you get in the package is the Black Box guitar performance recording system as the hardware component, alongside M-Powered Pro Tools 32-track recording software and a bunch of effects plug-ins - the G Rack.

If all that isn't enough, you also get a version of the Ableton Live Lite audio/MIDI sequencer.

The Black Box might just be the perfect interface between guitar and computer, as well as being a really good practice tool in its own right - with onboard amp sims, tempo-synced effects and drum rhythms.

The Black Box has had a firmware revision for the Guitar Box and is now the 'Black Box Reloaded' with 40 amp models instead of the previous 12 as well as more effects.

Perhaps more importantly, though, while it can still be used as a standard USB audio interface, it can now be used with Digidesign's Pro Tools.

Pro Tools used to only work with one of Digidesign's own audio interfaces, but with Digidesign's purchase of M-Audio they've brought out a version of Pro Tools known as 'M-Powered'.

This version will works with several different M-Audio audio interfaces, the Black Box being one of them.

In the audio interface role you can record guitar through the dedicated guitar input or use a dynamic microphone into the XLR mic input to record vocals and acoustic guitar.

A USB connection allows four tracks of audio (left and right effects, dry guitar, dry mic signal) to be sent to the computer so you can record the dry guitar sound on a separate track in case you want to treat it to different amp simulations later.

Monitoring is via front panel headphone socket and left and right output jacks.

A mix knob lets you set a monitoring balance between the direct sound and any pre-recorded tracks coming back from the computer, so you can hear what you're playing instantly with no monitoring delay.

Soundwise, the Black Box has been designed in conjunction with Roger Linn and has similar sounds to the innovative Adrenalinn II.

The major feature of that machine was the beat-synced effects that were automatically set to a specific tempo.

The Black Box shares this and the effects are always sync'd - either to MIDI clock, so that they're in time with the tempos set in your recording software, or to one of its 100 preset drum rhythms.

Sounds are collected into 100 fully editable programs, each of which is constructed from three components in a chain - amp simulation, effects and delay/reverb.

Using the Black Box in a live situation is also an option, as sockets to connect an expression pedal and two footswitches are present. M-Audio's dedicated three-function pedal will do the job.

Looking at the Black Box first in a standalone mode without a computer, its most obvious attribute is the range of unique guitar effects and textures that you won't find outside the Adrenalinn II.

The effects are synchronised to the internal drum machine or to an incoming MIDI clock pulse.

This means that delay time, tremolo pulse and flanger sweep are always exactly in time and mesh neatly into any track.

As well as rhythmic versions of conventional guitar effects there are also sequencing and arpeggiation programs.

This is where a single guitar note or chord is repeated rhythmically while the pitch or tone is transformed.

Overall, these effects not only vastly extend the palette of sounds available to you, but can really inspire you to take your playing and composing into new areas.

Everything is easily tweaked, with the four soft buttons under the large, clear display - a press of the amp, FX or delay buttons assigns the relevant parameters to the display and soft knobs.

As well as the esoteric stuff, the Black Box also does straight amp simulation and covers most popular amps, albeit without cabinet modelling and detailed parameter access.

Nevertheless with instant tweaks and compression available you can easily home in on the sound you are after.

Getting the whole system up and running doesn't take too long, with installation taking place from the supplied DVDs.

The first step is to install the drivers for the Black Box so that it can communicate with the computer via USB.

The Pro Tools software installs with no difficulties and works straight off as its authorisation codes are pre-installed on an iLok dongle that comes included.

The hard work is in configuring your system and getting to know Pro Tools, but there are guides on paper and DVD to help, plus a demo song complete with audio files that you can load in.

Pro Tools is no harder or easier to get to know than other audio and MIDI sequencers, but the key things is that it's an industry standard recording software.

The Pro Tools systems found in professional studios rely on different (and much more expensive) hardware but the software is essentially the same.

This means that home recorded projects can be easily transferred to studios for mixing and you can transfer the knowledge learned with M-Powered to any Pro Tools system.

Pro Tools has become the giant that it is because of its pure functionality and versatility in handling audio, with useful features such as Beat Detective groove analysis and detection tool plus plenty of effects plug-ins.

The extra G-rack effects bundled here extend the basic system with a bunch of effects with special appeal for guitarists, not least the software version of the Sansamp PSA-1.

This plug-in can provide a wide range of quality amp sounds as an alternative to those in the Black Box.

With all the software up and running, the Black Box seamlessly channels audio in and out of the computer.

Without the software the Black Box would be recommended anyway as it's a fine source of unusual sounds and an inspirational practice tool when you play with those beat-synced effects against the onboard drum rhythms.

However, with the whole Guitar Box package you're buying into a system that provides everything you need to turn your computer into a recording and mixing workstation capable of very high quality results.

You'll also be joining the expanding community of Pro Tools users, with the potential file transfer and collaboration opportunities that that may offer.

Considering those five extra plug-ins, (M-Audio claims that these alone are worth close to a grand), this represents great value for money and serves as a comprehensive introduction, with inbuilt longevity, to computer recording.