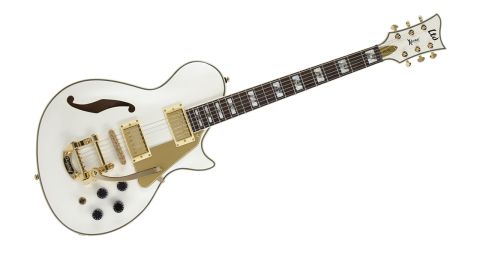 A fine build and design, which leans on the rockier side of the tone tracks.

An all-solidwood semi, with only a bass-side f-hole, the LTD Xtone PC-1V is a fully hollow guitar with a centre-block that runs from the neck joint to the base of the body.

Its stretched, off-set single-cut outline isn't for the faint-hearted - it's one of those guitars that looks way better in playing position than upright - and it's the heavy for a semi-acoustic, which gives it an almost 'solidbody' feel.

It's exceptionally well done, though. The inside of the maple top isn't carved, although wood is removed under the top around the f-hole, so the unbound visible edges don't appear over-thick.

It's bound, very cleanly, around the body edges, the fingerboard and the three-a-side headstock; the subtly metallic off-white finish is applied perfectly and a beautiful base for the gold-plated hardware and gold-sprayed pickguard. The black knobs and switch tip tie in with the purfling around the top edge and the dark rosewood 'board, with its large block abalone-centred inlays.

A nice touch is the roller saddles on the tune-o-matic, which makes the licensed Bigsby smooth-actioned, and although we have just standard - and a little sloppy - Grover tuners, it stays in tune very well.

There is a rear control cavity, although the controls, in playing position, are obscured a little by the Bigsby's arm, not least the three-way toggle, which might have been better placed on the expansive upper shoulder.

Weighty on the strap, the Xtone feels great - it looks extremely classy, too. There's a thick, more solidbody humbucker voice that sounds less open than your usual hollowbody, but with a righteous snap, it's more blues than jazz.

It likes a little crunch and would benefit from Wilkinson's Vari-coil (the pickups are four-conductor, so that's an easy DIY mod) found on the recently-reviewed Fret-King Black Label Elise 'JE'.

It's a little thicker in the lower mids, leaning towards rockier/indie styles. It's a tough cookie and loves on-the-edge-of-feedback sounds, where as the feedback emerges you can wave the vibrato arm. We knew we shouldn't have kicked in the delay pedal...

This is a dirty rock 'n' roll guitar with immense attitude, especially if you're partial to sonic manipulation.