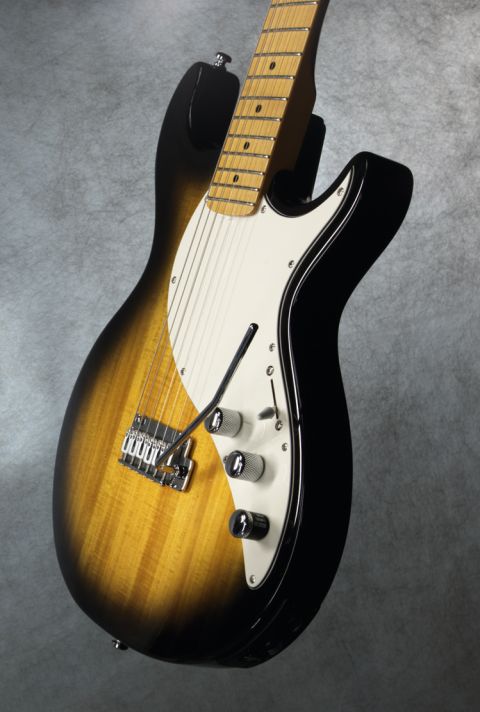 While the arched top 700 is aimed at the higher-end guitarist and the 300 is the entry level model, the 600 is clearly designed to tempt the would-be Fender player away from the vintage-reissue Classic Series or even the startup American series.

The fundamental design changes here started with the lower-cost 300: the scratchplate-mounted controls and six-in-a-line Fender-inspired headstock. The 600, however, adds the vibrato bridge of the 700 and - perhaps most importantly - a feel and quality level equal to anything of a similar price. Like the 500, the 600 uses a basswood body finished here in a vintage-accurate two-tone burst. The contouring seems a little smoother than on the original 500, though the forearm contour could still be deeper to create a sexier shape.

The neck is again maple, but its one-piece construction uses the face as the fingerboard, complete with necessary contrasting ‘skunk´ strip on the rear. The vintage vibe is enhanced with a nicely nicotine-coloured tone to the gloss finish, and the neck back is full but well-shaped with slight chamfering to the fingerboard edges plus nicely polished and profiled medium gauge frets. Parchment-coloured plastic laminate is used for the scratchplate and rear spring cavity coverplate, which again adds to the vintage look.

Like the 700, the vibrato is LR Baggs´ X-Bridge unit with two-post fulcrum and six individual height-adjustable saddles that house the piezo elements to provide the string information for the digital engine to work its magic. And here's the true innovation: Variax offers 28 digital models of solidbody, semi and hollowbody electrics, and acoustic instruments. For the most part, these are created from original vintage instruments. Not only are the sounds themselves modelled but also the way in which the volume and tone control work.

Unlike the 300, which comes with a more flimsy XPS Mini power supply, we get the pucker XPS A/B footswitch/power supply that not only powers up Variax but allows you to instantly switch between your guitar amp (standard 6.4mm jack output) and an acoustic amp/PA via the balanced XLR output. Alternatively, you can power the 600 with batteries (six AA or a single 9V block) - a flip-top compartment is provided on the back. Controls are simply volume and tone plus the rather flimsy-feeling rotary model selector that selects one of 12 banks (Spank, Lester and so on).

The five-way lever selector voices the five sounds within each bank. There are two custom banks that you can load with your favourite sounds from those supplied - ideal for live work. Output-wise we have the same jack output (the supplied stereo lead is intended for use with the XPS power supply) and digital in/output that hooks Variax up to PODxt Live, Vetta II and Workbench. But don´t get too worried - use batteries and you can use a standard mono cable and plug into any guitar or acoustic amp.

The Variax 600 feels very like a brand new Mexican Fender Classic with that all-too-new-feeling gloss neck finish. It makes playability a little sticky initially and you have to fight this one. The temptation is to set up one amp sound and flick through the models: we all do it. But trying to nail a great Fender twang or a Les Paul grunt needs a different amp setting (or even a different amp). As a control, we set up a PRS Singlecut to maximum Slash-esque tone. Selecting Lester (the Les Paul models) on Variax produced a brighter sound with a little less depth, but it's certainly in the ballpark. It´s the same comparing a real Fender Strat with the Spank models here, which incidentally sound brighter to these ears than Variax 500.

In some ways the Fender models make more sense on this platform but having a pair of open ears is crucial. All in all, there are a lot of sounds here - some, as ever, work better than others and it wouldn´t be our first choice for acoustic tones. Maybe it´s the vibrato (a shame there´s no hard-tail option) but they don´t sound as accurate, or useable, as on the hardtail Variax.

Variax 600 is a substantial improvement over the 500 - it goes for a vintage vibe and succeeds. The modelled sounds certainly summon up the characters of the originals and, particularly for recording, there's an awful lot of guitar here. However, with its vibrato it seems to suit electric more than acoustic.