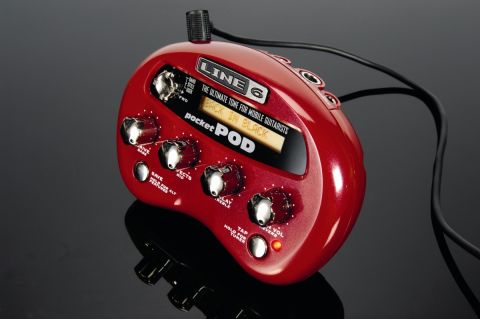 With the lack of MIDI or foot control, Pocket POD alone might not be suitable for pro or semi-pro players, but for practising, jamming or just having fun, it's a total no-brainer.

We'll admit to being disappointed that 2007 didn't prove to be the year of the Digital Modelling Brain Implant after all. Still, you have to admit that the Pocket POD is an interesting development in the miniaturisation of guitar technology.

Of course, there's nothing new about the concept of the pocket-sized effects unit. Back in the 1970s, Dan Armstrong produced a range of (now reissued) tiny effects units that attached directly to your guitar's jack socket, and the digital technology of the nineties saw Zoom's strap-mounted 9002 followed by Korg's Pandora range.

What's different about the Pocket POD, though, is that it's not a pioneering stab in the dark: it's another clever twist on an already well-proven and best-selling recipe. The POD range already covers a wide spread of musical needs and budgets, and the Pocket POD applies the same tried-and-tested approach to a new format.

Right out of the box, one of the main differences between Pocket POD and previous pocket-sized processors is immediately apparent. Where other products have been quite fiddly to use (especially in a pressurised stage, rehearsal or studio situation) all of Pocket POD's controls are large enough to grab easily and there are no superfluous knobs or buttons.

Patch navigation involves a four-way button, like you'd see on a mobile phone, next to the LCD display. The navigation system is different from other PODs with the facility to browse patches by style or band as well as by bank.

The style method is useful, splitting the patches into such categories as 'clean', 'crunch' and 'heavy'. Intriguingly, there's also a style subsection called 'song', where the patches are named after specific songs.

Plenty of effects units have sported thinly disguised references to songs and artists in their patch names for years, but there are no riddles here. This doesn't seem out of place, though, considering the way Pocket POD is being marketed as a fun practice tool: "Pocket POD lets you sound like a rock star wherever you go." But it's not just marketing-speak.

In the 'by band' section, over 100 presets have been created by the artists themselves, including Bumblefoot, Ash, Hoobastank and Killswitch Engage. All in all, there are over 300 presets, of which 124 are user-tweakable.

For instant gratification, all you have to do is insert four AAA batteries and plug in. The Pocket POD can also be powered via a 9V DC adaptor, but this would restrict the portability; you could always use rechargeable batteries for extra flexibility.

To help save battery power, the unit only works when a guitar lead is plugged into the input jack. In standard operation, the four easily grabbable controls cover drive, effect level, delay level and channel volume.

The gain staging is like all the other PODs, with the channel volume controlling the overall level for the patch selected. We found the default volume level a bit high for headphone use, but rather than having to adjust the level for each patch, you can adjust the master level by holding down the save and tap buttons while pressing the four-way controller up or down.

In a similar fashion, lots of other functions can be adjusted by holding down the save or tap buttons. This means they're not as instantly accessible as they might be on larger units, but it's not too awkward and ensures that the main control panel isn't too cluttered.

For instance, with the save button depressed, the four main controls now cover bass, mid, treble and reverb level, up/down changes the amp model and left/right changes the effect model.

All in all, there's a surprising range of control available on the Pocket POD, belying the simple appearance and low price. For example, we get an adjustable noise gate, a flexible tuner and four cabinet tuning options.

For maximum control, you can connect the Pocket POD to your PC or Mac, via the supplied USB cable, and access all parameters with the Vyzex editor/ librarian software (a free download).

The amp, cabinet and effects models in Pocket POD will be familiar to users of other POD models, and the unit has an obvious 'Line 6 sound'. Everyone has their own taste in digital models, and the Line 6 products have their style, easily distinguished from those of BOSS or DigiTech units.

Listening through headphones, the Pocket POD sounds big and powerful. Some of the more overdriven patches have a bit too much bass for our liking, but that's easily adjusted.

Although the technology inside Pocket POD has been around for a while now, we've given it our top rating because it's such an inspired use of that technology. Miniaturisation has its risks, and it's important for designers to strike a balance between portability and ergonomics. In the case of this tiny POD, the most important controls are within easy reach and are adjusted by comfortably large and tactile knobs.

While we noticed one slight design issue, relating to the weight of a guitar lead being able to pull the Pocket POD off a desk, this isn't a major problem and can easily be avoided by using the built-in belt clip, or with judicious use of Velcro!

While there's clearly less scope for instant tweaking than on a PODxt, for example, you can't really complain when the Pocket POD costs less than a lot of basic stompboxes, and less even than some electronic tuners.