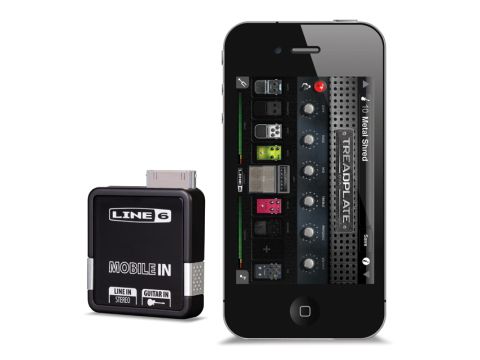 A promising package dragged down by its various flaws.

Since the launch of IK Multimedia's iRig and AmpliTube for iPhone, there's been a slew of companies joining the 'iAmp' revolution.

Line 6 has thus far been conspicuous in its absence from the App Store, but that's about to change with the launch of its free Mobile POD app and (not free) Mobile In hardware interface. Unlike similar interfaces, the latter plugs into your iOS 5 device's docking connector, rather than the headphone socket (more on this later).

"The models sound killer, and Line 6 has also bundled in hundreds of presets."

The Mobile In is fitted with mini-jack sockets: one stereo for line-level sources and one mono for your guitar. Line 6 supplies a quarter-inch-to-mini-jack cable, so that you can connect your instrument without having to use adaptors or buy a new lead, and the Mobile In plugs into your docking port to offer your device a pre-converted digital signal.

The Mobile POD app is free from the App Store, and you can open it without owning the Mobile In interface. The thing is, it just won't work without Line 6's hardware, even if you own one of the other available interfaces on the market; believe us, we've tried.

If you do have the right kit, getting started is easy thanks to the app's layout. The bottom half of the screen represents your 'rig', while the top part enlarges an amp or effect for editing. Simply tapping on the controls of your gear in the rig zone selects it and enlarges it in the top area.

To change the type of amp or effect, you tap the Cycle button to bring up your gear menu. The models sound killer, and Line 6 has also bundled in hundreds of presets. These range from sounds based on classic tunes to those in particular styles.

Also included are some artist-programmed sounds, although they could do with updating. Hoobastank? P.O.D.? 311? It's as if someone's nu-metal lovin' uncle got a job at Line 6. Please file these away with your eyebrow ring and cornrows.

The app also enables you to connect to Line 6's CustomTone.com preset bank for access to another 10,000 sounds - all gratis. Once you're done tweaking, you can save your own sounds and arrange them into Setlists for recalling later.

For the most part, we love the sounds that are on offer here, but there are a few problems. For starters, there's no way of integrating your iPod library for jamming and there isn't an aux in either.

We also want to record with the awesome sounds Line 6 has provided, and there's no facility for this. Finally, and this is a biggie, when you plug in the interface, you can't charge your device. We got about an hour's worth of playing on our iPhone 4 before we had to unplug and recharge.

There's no doubt that the Mobile In/Mobile POD combo sounds great - it's possibly the best we've tried, sonically speaking - but while the app is free, the overall package is relatively expensive, given that the competition offers recording, the option to jam with your music and audio file uploading for less.

It is what it says it is: quality POD sounds and presets on your iPhone/iPad, and this is where its strengths lie, but we were slightly disappointed by the lack of extra features.