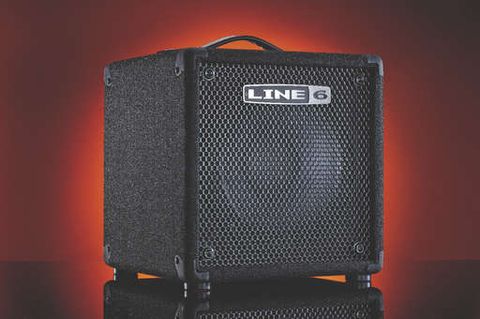 The LowDown Studio is impressive because it's so small. Having something this portable packed with so many quality sound abilities makes home rehearsal a joy, and don't rule it out entirely for gigging. However, being designed specifically as a tool for session bass players, that's where it obviously scores most highly.

Our first encounter with the Line 6 LowDown bass combo range was with the LD300 Pro combo and we were mightily impressed with its abilities and power rating.

The LowDown Studio 110 is both smaller and neater but every bit as impressive as its bigger brother. Although well appointed, the Studio 110 is not primarily intended for gig use; rather, as the name suggests, it's designed as a portable studio/ practice combo and it's a real corker!

The cubic design is ultra compact and, of course, being a Line 6 product, there's much more here than first meets the eye. So have we got modelling and effects? Yes we have.

Not to excess but enough to keep you amused while riffing away in the wee small hours. And as it has an earphone connection and a CD/mp3 input, there's absolutely no reason why you shouldn't do just that.

In keeping with the LowDown range this is an easy amp to use and the single input has a pad switch to match the output of any bass.

Drive and master handle the input and output volumes respectively, while the tone is manipulated by a four-band rotary EQ section that includes two mid-frequency adjusters. There's also a variable compressor to even out note attack and decay.

Four factory-set amp models are included, each with an illuminating switch, and their names of Clean, R&B, Rock and Grind leave no doubt about what they do. These can also be reprogrammed to your own sounds if you want.

Pressing down the R&B and Rock buttons simultaneously activates the synth setting and this also changes the attributes of the rotary controls to give a highly adjustable patch with various effects.

There's surprising depth to the bass response from the Studio 110 considering it's so small. This is loaded with a single 10-inch driver, but your ears just won't believe it.

And bearing in mind that Studio designation is the most important requisite here, the total lack of noise means this LowDown achieves its aims with ease.

Activating the individual amp models provides instant tonal variations with sounds based on classic bass rigs (think Eden, Ampeg and Marshall), so all are impressive and highly useable.

We particularly like Rock for well-defined notes with classic warmth, and Grind, with its higher treble content that physically punches the notes out of the speaker.

Although many players avoid bass synth sounds, thanks to the high level of adjustment offered by the rotary controls this effect suddenly takes on a whole new life.

Altering the likes of enveloping, resonance, attack and delay allows you to make the synth work for you rather than becoming its slave, and with a choice of nine waveforms (courtesy of the alternative use of the compressor control) the parameters are vast.

So whether you favour clean, distorted, synthy, warm or punchy sounds, it's all on hand with the minimum of effort.

Whatever sound you activate on the top panel is fed to the studio desk via the preamp out jack at the rear. Alternatively there's an XLR connection that provides mic'd cabinet simulation, so you can indulge your preference.

To get such good results with so much impact from something so small and transportable makes using this LowDown a real pleasure.