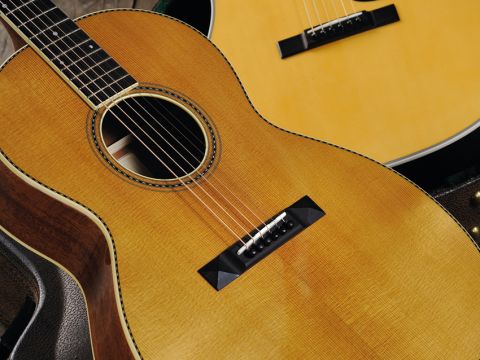 A sonically capable, good-looking guitar that will surprise open-minded fingerpickers.

The Larson Bros name might be unfamiliar, but it has real pedigree, even if the company itself is gone and the name is all that remains.

The originals were all US-made, but the Maurer Style 1-ES comes from the ES (European Series), which comes from the extremely well-reputed Furch facility in the Czech Republic.

First impressions are good. It's understated and simple in appearance, sporting little from the bling cupboard.

It's worth noting before we continue that Larson guitars don't come with any onboard electronics, but systems can be easily retro-fitted and the company recommends using Headway pickups.

The presentation of this Maurer model indicates that Larson Bros is clearly and proudly harking back to its considerable design heritage. The guitar exudes a 'pre-war' aura; the whole 'vintage'feel being augmented by the artificially aged, cedar-looking, spruce soundboard.

This reduced mass around the soundhole and upper bout results in an articulate, clear tone in the upper register, which is why 000 guitars are particularly favoured by fingerstyle players.

Although initially mistaking it for cedar, we like the matured look to the Maurer's soundboard. The technique employed was apparently invented 300-odd years ago by harpsichord makers to combat the damaging effects of extreme variations in temperature and humidity found in homes heated by open fires - hot, dry air with fires lit; cold, damp air as soon as the fires went out.

Using a complex drying process to artificially age the wood, it becomes uncompromisingly rigid. Larson Bros employs this time-consuming technique on its ES and Presentation Series guitars and it claims the instruments are more stable and responsive as a result.

Up close, it's apparent that a high grade of European spruce has been used for the guitar's top, while a bright, dense-grained section of mahogany is used for the two-piece back and satin finished neck.

The ES series features more decorative embellishments than its Standard siblings, though the overall theme is still simplistic and understated.

Some subtle upgrades make the Maurer a more attractive guitar, including the decorative fretboard inlays and the pyramid-shaped bridge ends. We also like the more detailed patterning around both the top's edge and soundhole.

The presentation of the slotted peghead is excellent, providing a good break angle for the strings. We particularly liked the side-mounted, open-geared Gotoh tuners, which are finished with an unpolished brushed-steel effect.

As with its stablemate, the Maurer features parabolic top and back, though this feature is a little less noticeable on this model due to the augmented dimensions of the lower bout.

Also different, the one-piece, bolt-on mahogany neck has a tapered profile starting as a 'V' at the nut reducing to a shallow 'C' by the 12th fret. The original Maurers built by Larson Bros were 12-fret models whereas our review model is a 14-fret to the body model.

Other alterations from the originals include a change in the bracing's position and profiling. We find the neck to be just about spot-on. Combined with an excellent factory set-up, the Maurer provides an enjoyable and non-taxing playing experience.

Although issuing from a different factory than the Stetson, the Maurer benefits from similarly high levels of quality control. It's hard to fault the Maurer's overall presentation and the sense of excellence it exudes - we have no complaints.

However, we can't shake the feeling that perhaps the Maurer is overpriced for a pure acoustic of this type, especially when you consider that £1,700-£1,800 these days will return a top-drawer electro fitted with some tasty onboard wizardry.

The Maurer's voice is a very likeable and usable blend of warm, smooth lows and bright, clear top end. The Maurer responds superbly to dynamic variations and the guitar's ability to define bass, mids and highs is particularly pleasing.

Digging in a little produces a crisp 'snap' with good sustain and, although not having the room-filling projection of the Stetson, the Maurer does offer ample volume. Asking rather than demanding seems to get the best out of this guitar.

Due to its exceptional tonal separation, we find this guitar to be best suited to and most rewarding for good old-fashioned fingerstyle playing.

Some have argued that today's Larson Bros guitars are too different to be considered true reproductions of the highly esteemed pre-war models.

Body sizes have been tweaked, the bracing position has been changed, bridges have been moved forward, and so on.

We're not convinced that the stated aim of producing an old sound from a new guitar has been achieved, but in truth, that's practically impossible.

So rather than focusing on what this isn't, we'd suggest you focus on what this is: a fine guitar made with quality materials to excellent build standards.

For this reason alone, it should be seen as a credible alternative to the equivalently priced Martins and Blueridges of today.