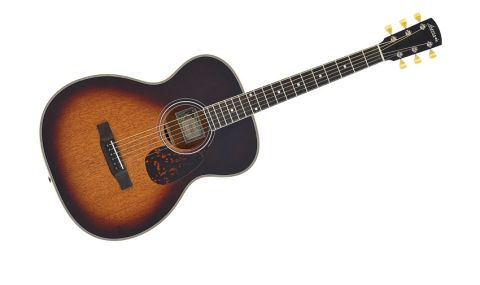 An exceptionally beautiful guitar that hits all the right notes in looks, sound, feel and playability.

We last caught up with the Larrivée's all-solid spruce/sapele OM-02E, with its full retail of £999 . Here we move up to the 03 Series with the more stately and very fashionable all-mahogany OM-03E 'Vintage'. If you like vintage-inspired 'classic' acoustics, you're in for a treat.

The basic specification on Larrivée's 03 series is spruce top with mahogany back and sides; here the switch to a mahogany top is the first of many changes that create the £650 'Vintage' upgrade package. Of these, the superbly evocative black-edged 'burst hits the spot.

It's contrasted by figured maple binding and five-ply black/white/ black/white/black purflings that in other contexts might look garish. Here, it fits the 1940s/1950s 'catalogue' style perfectly, as do the larger dot fingerboard inlays. A step too far might be those more electric guitar-like vintage Kluson-style tuners, but let's face it - if they offend they're an easy change.

Our sample has 12 frets to the body (14-fret versions will be available), but while always catering for his customer, Jean Larrivée is emphatic that 12-fret guitars sound better.

"There are no ifs and buts about it," he states. "I know because I've made enough of both 12- and 14-fret guitars to have an opinion. When you put the bridge in the middle of the diaphragm [the top] you're getting the whole thing moving. It's not me saying things: it's the truth. That why classical guitars are 12 fret."

Both the Tusq nut and bridge have generous spacing, making it ideal for the picker. The neck itself is one-piece mahogany with a full, slightly flat-backed D profile. The clean ebony 'board has micro-dot face inlays and larger black dots on the side, embedded into the grained ivoroid binding. We also have a 648mm (25.5-inch) scale length.

The tuners are perfectly functional, the nut is well cut, and the saddle is compensated and intonation spot on. The natural super-smooth satin finish is pristine, and it looks a whole lot classier to our eyes than a gloss. No doubt after a few hours playing the neck and forearm area will begin to subtly sheen.

Inside, there's a transverse back brace to support the larger area, but things are super tidy.

The OM-03E certainly has a Larrivée family resemblance tonally, but with its acoustic voice is bigger in the deeper and fuller low end, a relaxation of the midrange and a beautifully clear, sweet high-end. It seems to want to sustain for days.

The neck and string spacing mean the OM feels airy - ideal for fingerpicking, although it still falls within 'all rounder' territory. For strummed rhythm beds it's surprisingly good in front of a mic but, for this writer, it excels as a fingerstyle guitar.

We might expect an all-mahogany guitar to sound a little boxier than, say, a spruce top with its expected crisper, breathier edge. The surprise here is that this mahogany-topped OM has plenty of crisp, detailed highs but they don't sound over- cooked, just a little reined in - because of that there's an aged sweetness to its voice.

We can only guess how this guitar will age tonally but an instrument this well made from solid woods can only get better - a pretty scary thought, as even in its 'infant' stages it's quite something.

Plugged in the OM's tone control, typically, is little more than a high-end roll off, but backed off a little we achieve a fair representation of the guitar's acoustic voice. Still, while it's a perfectly functional and discreet system it doesn't really replicate all the nuances of the guitar's acoustic voice, especially after listening to a mic'd recording of it. To our ears, this is one guitar that shouts out for a magnetic soundhole pickup.

The 'Vintage'-spec OM, of course, is more expensive than the standard model. Larrivée remarks that it's virtually a custom build and that the all-over Sunburst is extremely time-consuming to achieve. If you think it's over-priced, it's time for a reality check. The OM-03E sounds truly world class - a superb all- rounder and one of the finest 12-fret fingerstyle guitars we've encountered. It looks vintage and sounds it, too.

We'll say it again: if Larrivée isn't on your radar, then you need a new radar.