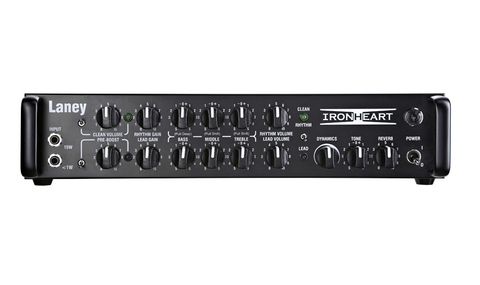 A cleverly designed product that looks set to find many friends in the home-recording/demo- studio market.

Laney's Ironheart range combines West Midlands technical expertise with offshore manufacturing economies to create a package that's hard to ignore. With the obligatory low-wattage 15-watt steel-cased head already in the catalogue, Laney's next step is another form factor that could be a hit in the home recording market. The IRT-Studio is an amp that squeezes a feature-packed 15-watt all-valve head into a svelte and smart 2U rackmount chassis.

As you'd expect, the IRT is an all-steel affair, but the metalwork is cleanly cut and folded, finished in satin black with white lettering. As is the way with steel cases, there are a lot of screws to remove to get at the valves, but they all go back cleanly, with no misaligned holes to cause cross threading.

The IRT's electronics are split into three main groups: the front panel and main printed circuit board occupy the front third of the tray chassis; the two EL84 output valves and transformers mount horizontally to a smaller 'board attached to a steel rail, which adds rigidity to the whole structure; while the output components are on another 'board in the rear, enclosed in a steel screening can to minimise hum. Usually, we expect to see toroidal mains transformers in Laney's products, but the IRT uses conventional horseshoe mains and output transformers.

The PCBs are neatly laid out and of high quality, and there's plenty of ventilation, with slots underneath and a large anvil- shaped mesh grille on the top, illuminated inside by red LEDs, but with no fan assistance.

In terms of rack mounting, the manual advises you leave at least one clear rack space above and below the IRT; we'd go further and suggest it should be on the top of any rack, because those EL84s chuck out a lot of heat, which may not be so good for devices immediately above it. Lack of a fan at home isn't such a big deal; in home studios, the noise can be a distraction, but using the IRT in a live environment could mean a completely enclosed rack case, where forced air cooling becomes more essential.

Rather than a using a switch, the IRT has two inputs for the different output power levels: one for 15 watts and one for less than one watt. There are three channels, with clean and rhythm channels sharing the top EQ, while the lead channel has its own EQ and a separate boost control.

Both EQs are conventional passive types with pull-switches on bass, mid and treble controls to extend bass response, lower the midrange frequency notch and broaden the treble respectively. We like the red collars on the controls, which make it easy to see when a switch is active. Towards the right of the front panel are three master controls for dynamics, a global tone control (which comes at the end of the amplification chain), and the built-in digital reverb.

The IRT-Studio's busy rear panel features a fully balanced output on XLR, with ground lift, +4/-30dB level switching and switchable speaker emulation. Next is the USB section, which outputs the fully processed sound on the right channel and a dry sound on the left. The dry channel has its own level control, and there's a useful re-amp input that connects the USB dry return to the amp input.

There's an aux in for your mp3 player, and a headphone outlet with its own level control, as well as a source switch that allows monitoring of either the USB or amp signal. As if that weren't enough, there's a series effects loop with switchable levels and a bypass option, and lastly, a speaker outlet with switchable impedance and a connector for the IRT's footswitch, which allows remote control for channel switching, both boost functions and the reverb. All in all, the IRT-Studio looks like a serious piece of kit, with all the functionality a serious home recordist could ask for.

We tried the IRT-Studio in a simple home setup using a Windows 7 PC and Cubase LE, as well as a more professional environment with a Mac running Pro Tools. We also used it as a straight amp, plugged into a 2x12 cab loaded with Celestion Vintage 30s.

Installation on the computers was straightforward, with a little tweaking needed on the Windows machine to get the audio into Cubase. We took Laney's recommendation to download an ASIO4ALL driver, after which the USB port worked reliably.

The speaker-emulated XLR output proved to have slightly better audio quality; however, the USB output allows the luxury of re-amping, outputting a dry guitar signal that can be fed back into the amp after recording, allowing for endless tweaking in the search for tone.

The IRT-Studio is aimed primarily at the modern metal player, and the sounds it produces are certainly in the right ballpark, with bright cleans that sound great when enhanced with a touch of the IRT's superbly crafted digital reverb.

The tones continue through heavy percussive crunch rhythms to searing hot leads with practically endless sustain and enough range to handle seven-string or detuned instruments with ease. At these extremes, the IRT works really well; what it's not quite as good at is subtle, mildly overdriven stuff, but in fairness, that's not really what it was intended for.

The pull-switches on both channel's EQ controls are a little disappointing; they work, but the effect isn't particularly noticeable, and it's better to reach for the global tone and dynamics controls when you need to tailor a new sound.

Overall, the Laney proves to be quick and easy to use in the studio, and we were able to put down a commercially usable track without any major issues. Used live, there's just about enough power to cope with small unmic'd gigs - but, of course, with the built-in DI, the IRT begs to be hooked up to a PA, which makes its modest 15 watts less relevant.

There's no doubt that the IRT-Studio has the features to become an indispensable tool for home use, serious project studios and the occasional live gig. Within the genres it's intended for, it certainly meets all of our expectations, although outside the metal/ shred environment the IRT is somewhat less effective as a tone tool.

Nevertheless, to find all these features in a real valve head is a real coup, and right now, the IRT-Studio doesn't have much in the way of direct competition, because the majority of products are software or hardware digital- modelling solutions - good in the studio, less so for live use.

The IRT's strength is that it can transition seamlessly from one to the other, or even do both at the same time if needed, making it practically indispensable when real valve- powered tone is needed.