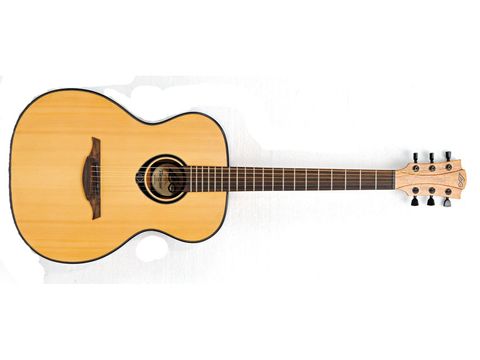 Don't for one minute dismiss the T66A because of its laminated top. It should easily go the distance against similarly priced solid-top rivals, making it something of a snip. This Tramontane is a real find among budget folks.

French maker Lag has been producing guitars for over 25 years, but it was only in 2005 that the company introduced its first acoustics.

Sourced from China since the start, the debut range was the Four Seasons - an extensive, affordably priced line of various body styles employing different permutations of body timbers aimed at reflecting, in a tonal sense, the attributes of the year's seasons.

In 2008, these were joined by a separate range of Tramontanes, which, claims the company, became so popular that they eventually upstaged the Four Seasons, which were discontinued earlier this year to make way for a brand new and greatly expanded Tramontane line-up.

Where the Four Seasons were relatively generic in their styling, the new Tramontanes (the name comes from a wind that blows across southern France) have a more distinctive appearance, thanks to the headstock design borrowed from Lag's Imperator solidbody electrics, where the central portion of the peghead is raised from the outer wings.

In choice terms, the Tramontanes, priced between £179 and £655, are even more numerous than their Seasons predecessors, offering 50 acoustic and electro model variants - covering jumbos, dreadnoughts and auditoriums - divided into T66, 100, 200, 300 and 400 series. A handful of nylon-string auditoriums, both acoustic and electro, are also included.

As the range's least expensive auditorium, the T66A has an all-laminate build of spruce and mahogany. The absence of a solid top might betray its entry-level status, but nothing else does, because the guitar has a cracking presentation for the money.

The front and honey-hued back and sides carry wide black-plastic binding with ivory-coloured purfling and coachlining, and as seems to be the case on all Tramontanes, the binding is softly radiused around the edges to lend a smooth, flowing air and touch to the body profile. The soundhole rosette is inlaid with similar plastics, while the stylish teardrop cross-motif design is a Lag hallmark.

The body's high-gloss finish is buffed immaculately, while the precisely fashioned winged rosewood bridge has pinless stringing, with the area behind the saddle routed out to ensure a good break-angle regardless of action height. The fully compensated saddle itself is black graphite - as is the nut - a material very unusual to find on a budget acoustic.

Like the instrument's external execution, the internals are pretty much spotless, and the back and rims appear to be genuine laminated mahogany, though we can't vouch for the invisible, in-between third ply.

The three-piece full-scale mahogany neck, with a volute under the nut, is a bolt-on affair of regular span and fashioned to a shallow, flattish-backed 'C' profile which, allied with the unbound rosewood fingerboard's gentle camber, proves an immediately obliging player.

String spacing at the bridge is a regulation 55mm, so fingerstyle is suitably catered for. Though officially satin, the neck finish is actually a low gloss and pleasingly slick. The thin fretting on the marker-less fingerboard (don't worry: the side dots are all there) is tidily fitted and polished, though the ends merit more rounding off to eliminate a slightly nibby feel.

The heel, in common with other Tramontanes, is shaped to a shallow, vertically sided 'D', which sounds a tad abrupt in theory, but is perfectly comfortable in practice and helps extend one's reach towards the dusty end. It's good to report that a second strap button is fitted here, a useful hardware detail shared by all models.

As to the stepped peghead, this is achieved by a headplate, which has a couple of millimetres milled off its thickness along the lateral areas. It's an unusual design to find on an acoustic guitar, but it suits the instrument well, especially accompanied by its satin-black tuners.

The guitar's all-laminate construction might not seem to promise much in the way of performance, but in fact the T66A acquits itself admirably. Volume and projection are generously up to folk-size standards, the dynamics and sustain are free and responsive, and the clearly defined tone is a pleasant blend of low-end warmth and sunny yet not overly bright highs.

The sound may not mature much over time, so received wisdom has it, but few of us are going to be disappointed with things as they stand.

You'll need some time out to trawl through the Tramontane range in its entirety, but if the others are as good as these this, you should be well satisfied. The build quality and detailing are excellent considering the keen price; it looks expensively stylish and sounds the business.