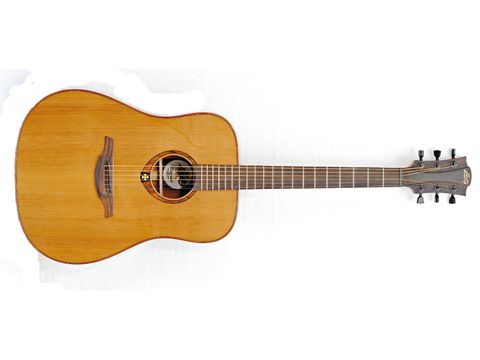 A hearty welcome to the ranks of affordable, eager-to-please dreadnoughts

French maker Lag has been producing guitars for over 25 years, but it was only in 2005 that the company introduced its first acoustics.

Sourced from China since the start, the debut range was the Four Seasons - an extensive, affordably priced line of various body styles employing different permutations of body timbers aimed at reflecting, in a tonal sense, the attributes of the year's seasons.

In 2008, these were joined by a separate range of Tramontanes, which, claims the company, became so popular that they eventually upstaged the Four Seasons, which were discontinued earlier this year to make way for a brand new and greatly expanded Tramontane line-up.

Where the Four Seasons were relatively generic in their styling, the new Tramontanes (the name comes from a wind that blows across southern France) have a more distinctive appearance, thanks to the headstock design borrowed from Lag's Imperator solidbody electrics, where the central portion of the peghead is raised from the outer wings.

In choice terms, the Tramontanes, priced between £179 and £655, are even more numerous than their Seasons predecessors, offering 50 acoustic and electro model variants - covering jumbos, dreadnoughts and auditoriums - divided into T66, 100, 200, 300 and 400 series A handful of nylon-string auditoriums, both acoustic and electro, are also included.

While this dreadnought's underlying cosmetic and hardware approach is not dissimilar to the T66A's, the treatment is appropriately more upmarket, plus the cedar/mahogany build involves a solid top - and a fine-looking one at that.

Smoothly radiused body binding is mahogany, with maple/black- fibre purfling and coachlining, and extends to a centre strip down the back. The soundhole rosette is a similar mixture, with the cross motif nicely highlighted in maple. The quality of the high-gloss lacquering is impeccable, and the back and sides are stained to an 'old port' hue - a deep reddy-brown that looks very classy indeed, as does the whole instrument.

The mahogany neck appears to be glue-jointed; the rosewood fingerboard is bound; and the stepped peghead overlay is rosewood. Slightly oddly, this headplate is left matte, not satiny low-gloss like the rest of the neck. Up the other end, the strap button is fitted not to the heel cap but to the face of the heel, and tends to get in the way when playing around the octave.

Playing-wise, the neck is a comfortable, speedy proposition, despite a deep, traditional profile, though we'd prefer a slinkier action than the one found on our sample. For no obvious reason, the holes in the pinless bridge are drilled for slightly tight string spacing (53mm), though this doesn't adversely affect fingerstyle techniques to any real degree.

As dreadnoughts go, this is a bit of a belter. It's loud, quick on the attack and packs a decidedly healthy dollop of warmth-infused bottom end without muddying the overall delivery.

Played hard, the briskly toned highs can sound a tad crashy, but considering its abilities as an enjoyably robust strummer, this can easily be forgiven.

You'll need some time out to trawl through the Tramontane range in its entirety, but if the others are as good as this, you should be well satisfied. The build quality and detailing are excellent considering the keen price; it looks expensively stylish and sounds the business.