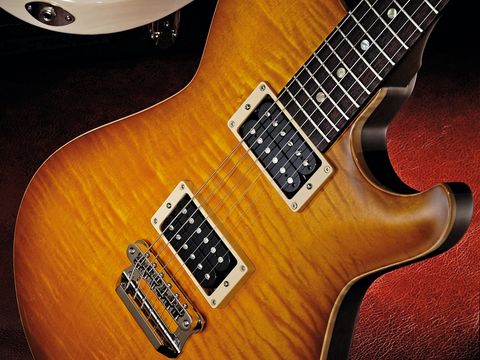 If you like your single-cuts to sound old, clear and soulful, try this.

Our review model, the Kenai, comes from Knaggs' Influence series, informed, obviously, by Gibson. It sits - along with the Chesapeake Severn 3 - in the lower of three specification tiers offered by Knaggs.

The Tier 2 and 1 versions get progressively blingier and more expensive.

In outline, the Kenai is closer to the Les Paul than the Severn is to the Stratocaster. The waist is slightly broader, the base slightly flatter and those lower flanks flattened compared to the rounder lower body of the Les Paul.

The treble horn is a little longer with a slightly pointed tip, but the main difference is the more pulled-out Tele-like shoulder.

With a nicely graduated and contoured carve, the subtly figured maple top has natural edge 'binding', like a PRS. It's thinner than a Les Paul, or indeed a PRS Singlecut, and measures about 52mm, which is pretty much the same as the PRS McCarty.

Yet the substantial carving on the back - a chamfer that goes from the upper shoulder round to the jack socket - not only reduces the apparent thickness but also makes for a comfortable guitar that sits right in to your body.

There's quite a steep Les Paul-like back angle to the neck pitch too, and along with the Gibson- like 628mm (24.75-inch) scale and 16th-fret neck-to-body join, not to mention the back-angled three-a-side headstock, we have a very classic feel.

There's a similar balance and geometry to the Les Paul, but one that's much more comfortable. The heel has a similar 'boat bow' shape and top-fret access is easy.

Weight-wise, the Kenai is more than acceptable for a modern solidbody of this style. Frets are wider and flatter, while the Gibson-like 305mm (12-inch) radius 'board is unbound.

Shell dots add a little bit of bling, but the star inlay is the only flash of opulence - inlaid perfectly, like the model name on the truss rod cover, into the ebony head facing. The neck's profile is classic too: a deep slope-shouldered 'C', 22.15mm at the first fret, 24.9mm at the 12th.

"It's our spin on an old '59 Les Paul; it's a bigger neck than the Severn. It's a little less round than an old Les Paul but the specs - front to back and nut width - are similar," says Knaggs.

The bridge and tailpiece are designed to deliver additional resonance. The latter connects directly to the Gotoh tune-o-matic.

The black-bobbined open-coil Duncan '59s are controlled in classic Les Paul fashion - only the toggle pickup selector switch is moved, from the upper shoulder to the lower centre side of the four rotary controls.

The jack socket sits on a thick, square chromed metal plate on the side and Dunlop Strap Loks are standard.

The Kenai tackles an old recipe with some subtle adjustments to feel, not least strapped on - where that back contouring makes the guitar feel much more a part of you than the bulkier Les Paul.

The pickup choice clearly goes for old Les Paul, brighter than you may expect on the bridge pickup - with a balanced mid-range that doesn't over-influence the sound - and bass end.

Combine that with the bridge design and that subtle enhancement in ring and you have a guitar that is more original Peter Green, beautifully rich and soulful, than the darker mid-heavy clout of many modern Les Paul-toting icons.

The neck pickup is sweeter and slightly more characterful - chewy but not soft. Both are sweetened with volume and tone reduction - in fact, for most of this test the bridge pickup's tone was wound down to seven or eight. In short, don't be afraid to use your controls to find your own sweet spot. There's a good depth here, too - jazzier licks have a silky fatness that is quite ES-335-like.

On crunchier tones, the balanced mid-range doesn't really capture that round-nosed modern Les Paul clout either, but with the tone knocked back we hear an older, resonant and grainier voice - again, character is the word.

The neck pickup comes into its own, smooth but clean-edged, and there's a beautiful dynamic range that enhances the subtleties of your style. The more we play, the more sounds emerge, most of them referencing the first three decades of the electric guitar.

To our ears, this isn't a hard-rocking machine; it has classic rock, blues and soul stamped all over it. If you play with all your controls on full and use pedals or amp channels to shape your sound, you won't get anywhere near its full musical potential.

The Knaggs Kenai is right up there with any of the top-quality electrics being built today - and that certainly includes those from Nashville and Stevensville.

Initially, the range seemed ultra-expensive, but this Tier 3 model, which will no doubt hit the streets for less than the full retail price, is certainly in the right ballpark. In fact, for such quality and small-scale production some might think it's too cheap.

But why would you chose one over the numerous available Custom Shop Les Pauls, or those inspired by these classics? Well, while it displays it roots - but with more than enough visual differentiation - it doesn't mess with the feel of the originals' scale length or geometry and improve on those classics in numerous ways.

The resonance is the icing on the cake though - the enhanced ring and sustain keeps you going back for more. This is a truly great guitar.