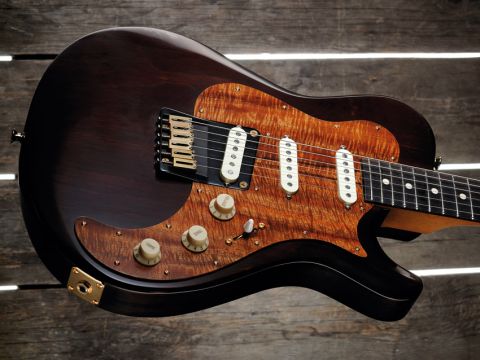 If your buying choice is simply about sound and feel, and you love old Fender guitars, then you need to play the Chesapeake. Be warned: you might have to buy it though!

If you've followed the progress of PRS Guitars, you'll have undoubtedly come across the name Joe Knaggs. A long-time employee of the Maryland-based brand, Knaggs could be described as Paul Reed Smith's right-hand man, culminating in his role as both head of R&D and of the Private Stock programme. In 2009, Knaggs left PRS to pursue his dream of making his own-brand guitars.

If Joe Knaggs is known for creating and designing some of the worlds most exotic and plush-looking instruments, the Choptank might come as a surprise. You can certainly get a posher version (see spec), but in its Tier 3 incarnation, the Choptank is, by design, a no-frills 'working man's' guitar.

The Chesapeake series electrics are all about long scale, six-in-a-line headstock: in other words there's a definite Fender influence in the geometry and feel of the guitar, if not necessarily the appearance.

"I designed the Chesapeake series because I've played a 1961 Strat all my life," says Knaggs, "that's where the inspiration came from, but I wanted to make my own body and headstock shapes, a different radius on the fingerboard - a little flatter than the vintage Fender 7.25-inches, so it doesn't fret out, but still has that old Fender vibe to it.

"When you play an old Strat, you notice that your hands wrap around the neck because of that radius. The bummer is that the radius is so tight that a lot of times it'll fret out on the top frets. I think I've taken it to the right spot [8.5- inches], where it feels right but doesn't fret out."

The 46mm-thick swamp ash body - barely visible through the English walnut finish - has a Tele-like swagger, but some contouring to the top in the forearm region and pronounced edge chamfering soften the slab appearance while those edges and a rear rib-cage cut all up the comfort factor.

There's a similarity between this and the Knaggs-designed PRS Mira and Starla, but the Choptank predates both of those.

"That's right, the first Choptank dates back to around 2002. I was trying to make a Tele-type guitar but with more of a look… make it more comfortable and with some more stylish lines. Those bevels take a lot of weight out too."

It's a set-neck guitar, but the quarter-sawn maple neck fits onto a very bolt-on like platform - the only things missing are a neckplate and screws. Fit and finish is good and the neck comes to a slight point at its heel, which is then mirrored on the body. Classed as a '52' profile, the neck feels superb: a good old fashioned big, but not too big, nicely shaped Fender-style profile that's capped with a dark brown rosewood 'board.

"When I made that original Choptank, I took a neck carve from a 1952 Telecaster," says Knaggs. "It's based from that but not exactly the same; it's got a bit of the '61 Strat in there."

Aside from the flatter radius the 'board remains quite vintage - unbound with the frets classed as 'tall and thin', similar to an old Fender wire with a little more height.

The altered Fender outline headstock is back-angled so there's no need for string trees to pull the strings into the groves of the bone nut; the only visible serial number is a '5' handwritten under the finish - each model is simply numbered sequentially - and we get gold-plated Kluson-style tuners, with nickel grommets.

Yet there's awkwardness to the Choptank's design that will surely divide opinion. Here's a 'working man's guitar' but at every opportunity there's gold plating: the tuners, the 19 slothead scratchplate screws and the saddles, which contrast the black bridgeplate. Then we have the added contrast of the cream pickup covers, knobs and switch tip.

But, not least in this deep brown finish, there's a seventies vibe here - it's the sort of guitar you could have imagined Keith Richards playing when he'd happily use a variety of more leftfield custom-style instruments.

And there's a very custom-build ethos here, not just in the number of no-cost options that are available, but things such as the 'sheen' finish, which looks less like the 'dipped-in-glass' finish that Knaggs is known for than a hand-rubbed finish. It's actually nitro-cellulose over a very thin polyester sealing coat that's cutback with steel wool.

Again not everyone will think it's cool, but for what is undoubtedly a working guitar it looks and feels very right to us. It's not aged as such, it just seems like the guitar has already lived a little.

The bridge is certainly different. Based on a Telecaster, its baseplate has a raised back and sides that enclose the six Strat-like saddles.

"I was at my buddy's house, playing his Telecaster, and I just asked myself, why didn't they screw the front of the bridge down? The back is screwed down; it's not that you can see it but the front isn't locked down. So I drew up a bridge, I also wanted the saddles to be contained; we made the 'plate out of steel and screwed it down; it's a little thicker than a Tele bridge, but to me it's a huge deal in driving the sound though the body.

"Your focal point is the saddle. That's pushing down the screws onto that steel plate and that, since it's screwed down, is bringing the sound into the middle of the body. That's really where I was coming from with that and I think you can really hear it on the Choptank."

The pickups are more straightforward, a trio of Alnico V Fralin Blues Specials and vintage Strat-like controls including old-style tones for neck and middle pickup, but not the bridge.

This early model has a couple of non-standard features: future Choptank 3s will feature Seymour Duncan single-coils (the Fralins will feature on the Tier 1 and 2 models) and the koa scratchplate will be replaced with rosewood.

Numerous makers have combined the Telecaster and Stratocaster, but few have done it quite so well as this. From the moment you pick up the guitar there's an undeniable 'Fenderness' about it: the neck, the slight fight to the string tension, not to mention a dry and ringing acoustic resonance.

Amped it doesn't disappoint in the slightest. The bridge pickup has plenty of Tele bite, but is nicely balanced with the middle pickup's ruder, fuller tone and the soupier but not too dark neck pickup. The hum-cancelling in-between sounds are as they should be - slightly softer and more complex harmonically.

From ringing cleans to spikey blues, country twang, sweet poppier soul and funk the Choptank delivers. It likes some gain too, grainy and punky if you need, fuzzy, snarling, biting and fighting. If you're into the Fender sound, the Choptank could well be your new best friend.

As a statement of intent, the Choptank is very strong. It's a guitar that has a very different vibe to what Joe Knaggs is known for and is hugely informed by his love of old Fender guitars. It sounds very special and feels it too.

Visually, however, not everyone will get it. It's certainly not a cheap guitar - even though it kicks off the new expansive range pricewise - and we can't help thinking that some will think the mismatched hardware and 'sheen' finish don't belong in this lofty price range. That said, there are more than enough no-cost options to tailor it more to your taste.

Personally? We love it - it's a guitar to gig and gig.