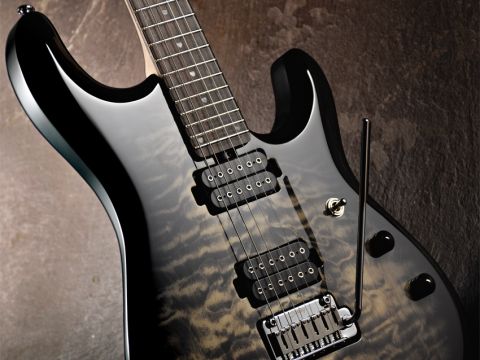 The JP100 has plenty to recommend it. While we have a few qualms about it, they're rooted in the worst kind of vanity.

It's not often that we turn to Puff Daddy for wisdom, but he's right: it's all about the Benjamins. Exotic timbers, bespoke pickups, personalised profiles - none of these are worth a damn if you only experience them as a sweaty-palmed voyeur pressed up at the guitar shop window.

Luckily, after the demise of Music Man's OLP range in 2009, the rise of the affordable Sterling sub- brand suggests this luthier is still committed to arming all comers.

The JP50 romped to victory in TG205's Group Test, so this flagship spin on John Petrucci's signature axe should do the business too, right? Maybe.

In these dark days, when petrol costs a tenner a spoonful, perhaps we shouldn't be surprised that the Indonesian-built JP100 is, y'know, a bit expensive.

Okay, so that price is a drop in the ocean compared to what you'll shell out for its inspiration - the Ball Family Reserve Petrucci JP6 - but you can't comfortably file this model alongside the Squiers and Pacificas as a thrifty choice.

Inevitably, the JP100 skips the piezo pickup and DiMarzios of the top-dollar JPs, but it does stick close to the styling. Shame: Petrucci's design isn't much of a looker, coming off like a snub- nosed mash-up of every doublecut you've seen.

With its boring finish and stunted control dials, this is a slightly forgettable axe. But wait! If you're happy to judge with your fingers and ears, this guitar will change your mind.

The bolt-on maple neck is where things start picking up. As well as its slim dimensions, it also has a dead-flat section that runs down the centre of the back, allowing the meaty section of your palm to get close to the action and giving your fingers the support to dart all over the taut 25½-inch-scale playing surface.

From fretwire to finish, the key word here is 'smooth'. There's really nothing to slow you down and the overall impression is of an axe that laps up the precise technique that Petrucci's style demands.

The vibrato might look pedestrian, but it's actually a hard-bending, pitch-retaining workhorse that's infinitely less hassle than a floater.

Apparently, the JP100's pickups are modelled on the original DiMarzios. Sounds like wishful thinking, but this axe knocks the tone test out of the park. Not since Susan Boyle has such an inauspicious object produced such a quality voice.

Despite the humbucker format, there's a nasal funk snap to these units that will delight Fender fans: the sound's punchy and woody, but with a lush sonic weight behind it (shame the coil-taps of the pricier JPs haven't made the transition).

Distortion is a riot. It's seriously loud and fat, and definitely ballsier than the JP50, thanks to the increased body mass and maple flavour.

Our first sticking point, though: can you get past the fact it's arguably not that sexy? And, secondly, are you able to stomach the fact that you'll pay £715 and still overhear the odd punter saying that you're playing a 'poor man's Music Man'?