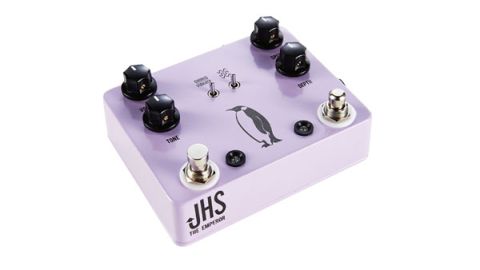 Using Bucket Brigade circuitry, The Emperor from JHS Pedals offers both chorus and vibrato, like a modern version of the Boss CE-1.

Six different sounds can be called up by using two toggle switches: one chooses chorus or vibrato, the other offers a choice of three waveforms - sine, square wave or triangle.

The modulation speed is controlled with a tap tempo footswitch on the fly, or with a standard speed knob. Alternately, you can connect a TRS Expression pedal for speed control or an external tap tempo pedal.

Chorus tones are all that you could wish for, with sounds reminiscent of classic 80s pedals. The on/off square wave chorus is a bit of an odd one, but it can be effective if you set it in time with the music using tap tempo; likewise, the square wave vibrato.

Pitch vibrato is more of an acquired case, but it makes some nice effects available, not least some fast shimmers.

A very cool way to add chorus and vibrato to your pedalboard.