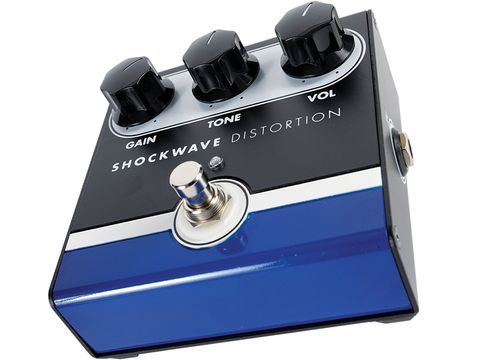 If you're after no-nonsense distortion of real pedigree, investigate the Jet City.

Let's hear it for hands: they pull the strings, fret the notes and throw the horns. But if all you do with your feet is tap out time, mount monitors and shoe the odd stage invader, then you're halving your body's potential to rock.

At this point, the more highbrow members of our readership will probably start muttering something about "favouring the organic break-up of valves" to "cheap outboard distortion". Their loss.

From the boutique-style units through to more affordable additions to your pedalboard, the modern pedal marketplace is a fun-packed pick 'n' mix, where a rainbow of sexy and savage stompboxes jostle for the attention of our size 10s.

No sector is more seductive (or more saturated) than distortion. From the moment that Roger Mayer built his first fuzzbox for Jimmy Page back in 1963, distortion pedals have been part of our lives.

In 2011, there are so many models that stacking them up could recreate the Great Wall of China (possibly), which is cool, but also means it takes a special flavour of filth to get our attention and stop us going over to the multi-fx side.

With Mike Soldano in the cockpit, Jet City's valve amps invariably prick up ears at TG Towers, but his pedals have so far been more of an enigma.

The Shockwave Distortion's vibe couldn't be more minimalist, so it probably won't do much for the superficial young filth fan who craves buttons and bleeps, but to mature players, there's something weirdly reassuring about its skeletal layout of dials and its bullish sales shout-out to "serious and versatile guitarists". So, no, the Shockwave doesn't do much, but it does it damn well.

With a Gain control that raises the temperature by degrees, there are shades of the Visual Sound Garagetone Chainsaw in the one-knob tone-shaping concept, but we prefer this unit in practice.

Tested with a humbucker electric, there's a really strong vintage crunch to the lower-end distortion, and to these ears it works best when you roll back the tone control and crank out some big, British- sounding bottom-heavy riffs.

That said, for a unit that looks so dull, it's refreshing to find that the Shockwave has a real split personality, bringing genuinely white-hot, high-gain sounds to the table when you start twisting.

Some distortion pedals paint themselves into a corner by trying to live up to their ridiculous names. This unit is different: it can do extreme, it can do subtle, it can lift a mediocre amp to supersonic performances.