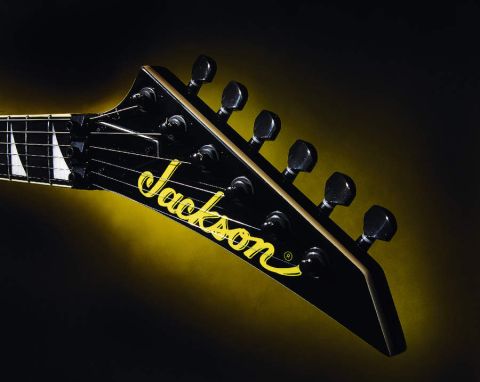 The RR24 isn't a huge departure from what already exists, but it rocks and will strap a pair of bollocks to your band overnight. And that's what Randy would have wanted.

The distinctive Jackson headstock is a modern classic

The RR24's simple setup makes it the perfect metal weapon

Rhoads didn't spend long on this earth. The neo-classical guitar prodigy was plucked from Quiet Riot to join Ozzy Osbourne's band in 1980, contributed to just two albums and was pulled from the wreckage of a light aircraft at the tender age of 25.

If there is a silver lining to this tale, it's that before his death Rhoads collaborated with the Californian luthier Grover Jackson to design his own signature model. Originally known as the 'Concorde' (before a more refined version was renamed the Randy Rhoads), the resulting guitar was not only Jackson's first production electric but it was also the model that put the company securely on the map.

According to TG's calculations, the RR24 we're testing here is one of eight Randy Rhoads models on Jackson's books. And based on a perusal of the price sheet, it sits somewhere between the USA Select Series RR1T (at £2,099) and the entry-level JS30RR (at £249).

Granted, TG has never had our hands on the bells-and-whistles RR1T, but we were blown away by the JS30RR and RR5 models and we're expecting serious justification for the price hike of the RR24. Is this model really four times better than its bargain basement equivalent? Seriously?

Obviously, you can't mess around with the basic appearance of the Randy Rhoads guitar (the design is pretty much defined by its characteristic shape), so Jackson has given its design team yet another afternoon off and set the band saw in its Japanese factory to 'business as usual.'

The result might be derivative to anyone who has flicked through a Jackson catalogue over the past three decades, but this model is dynamite in its own right, with a vicious upper bout that makes the body look like a Flying V with a hernia, bevelled edges all round and the trademark six-in-line headstock that Rhoads supposedly designed himself.

The RR24's body material is the same as the top-spec models (solid alder), but inevitably the colour options are more limited than the Graveyard, Snakeskin and Pile O' Skulls finishes that you'll find in the US Select Series.

Frankly, TG thought this particular black and yellow colour scheme made the RR24 look like the kind of wasp that you really wouldn't want turning up at your family barbecue, but at least the inlays of this axe should go down well with Jackson purists, with those MOTO shark fin position markers punched into a bound ebony board and at regular intervals along the two-octave rock maple neck.

Ah yes, the neck. One of the unique selling points of the RR24 model over its lower-priced siblings is that it features a neck-thru-body construction. This means that the neck doesn't stop when it hits the body; it forms an integral part of it. It's not much to look at (although in this case the heel is admirably svelte as a result), but it should translate into lengthy sustain and bring a subtle edge to the tone of the alder.

With a bit of luck, the dealer should already have set this up if you buy the RR24 from a shop (though it'll only take a few moments with an Allen key if not). Once that's done, you'll just need to make subtle adjustments via the fine-tuners every now and again, regardless of how viciously you tug the screw-in whammy bar. TG can't decide if the RR24's pickup configuration is exciting or slightly limited.

On the one hand, you've only got one pickup in the bridge position and a single volume control to set the output level.

On the other, it should be noted that the pickup in question is an EMG81: perhaps the most revered active humbucker on the scene since its launch in 1979 and a far more interesting prospect than either the Seymour Duncan or own-brand Jackson humbuckers that appear further down the RR range. The only trouble will arise in the (unlikely) event that we don't actually like the bugger…

There's a lot of wood in the RR24, but it's spread over a wide area rather than swamping your chest and balances far better than many models with a comparable shape. This comfort extends to the fingers.

Physically, there's literally nothing you can't do on this guitar - from slackening the strings with the tremolo to nail the quintessential metal 'motorbike' sound to stretching the top notes up to squeal-tastic levels with a yank in the opposite direction.

The RR24's tone was always going to be more divisive. As we've noted in the past, the 81 doesn't really 'do' mellow; here we found it was too biting for chords and demanded that we use our Marshall to soften it because of the lack of a tone dial.

While this initially made TG grumble something about how the dozy buggers should have put an EMG85 at the neck, it all started making sense when we hit the gain. In case you hadn't guessed, this is a lead guitarist's guitar. You're meant to use it for legato, tapping, alternate picking - all the techniques that demand pin-sharp sonic clarity.

And when it comes to clarity, you can't beat the 81. Where a thicker 'bucker would most likely have lost some of the nuances as we brushed over the strings at warp-speed and high gain, this malevolent black beastie didn't miss a beat, delivering a stunning ragged sneer that was somehow still crystal clear.

Has Randy Rhoads really been dead for 25 years? It doesn't seem like it, and that's doubtless because his stunning signature models have kept his name burning with neon intensity in the metal scene.