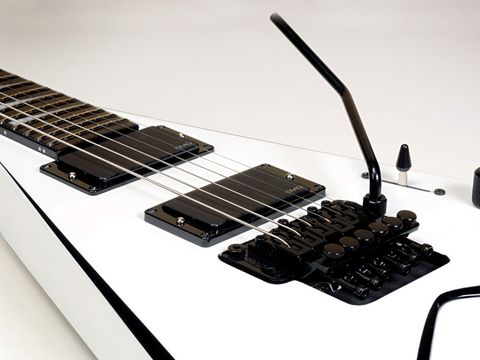 The King V is so good it hurts. Expensive, but so worth it.

Being a Machine Head fan involves an element of masochism. We allow the US legends to smash us over the head with sledgehammer thrash riffs, offer our eardrums as sacrifices to their god-like genius, knock out our teeth in the mosh pit…and stagger home with a grin plastered to our face.

Wouldn't it be great if you could violate an audience like that? Turns out you can. The man responsible for the carnage is Phil Demmel, and the Jackson Demmelition King V round his neck is now available on the UK market. The downside? It's £1,119. Now that really hurts…

"You don't mess around with the Demmel-ition man," quips Jackson on the website, which is a fair comment, with the Demmelition adding mental barbs to the standard King shape to produce a guitar whose pint you wouldn't dream of spilling.

But this is more than just a toasting fork, says Jackson, referring us to the maple thru neck and ebony fingerboard, flagging up the 24 jumbo frets and Floyd Rose, and running a finger seductively over the twin active EMG humbuckers.

The underlying message is clear: yes, it is bloody expensive, but with all this hardware, can you afford not to have one?

Demmel doesn't play Strat-style models because "they land on my body funny", and we must be built like him because this feels fantastic. It's not too heavy, balances a treat and lets you bear down on the 'board like an angry metal god.

This beast has been set up for low tunings, and that's how we play it, with doomy thrash rhythms and brittle alternate-picked solos rolling off our fingers, and a general 'play faster' feel up to the 24th fret.

Say what you like about Jackson - nobody else makes guitars that respond this well to hardcore technique.

What can we say about EMG pickups that the metal A-list hasn't already? They must be the best use of a nine-volt battery in the world.

The Demmelition's inclusion of active 60 and 81 units is the rubber stamp on its greatness, with our shred solos blazing through the speakers and our low-end riffs supplying a level of bone-crunching authority that would make the sound engineer at Download empty his bowels.

It's the icing on a ferocious cake.