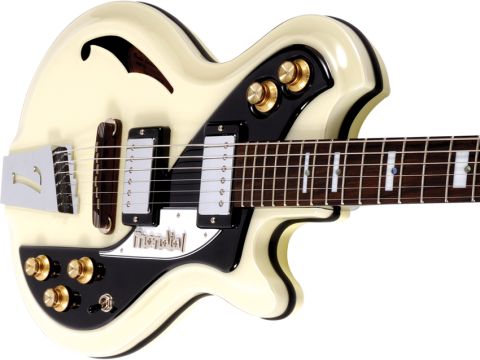 If you're looking more for electric than acoustic and aren't put off by its eccentricities, the Mondial is well worth checking out.

We feel we're selling the Italia Mondial Classic short by calling it a 'two-in-one' - it looks like a mash-up of at least five designs. Fitted with numerous tone controls, an f-hole, a retro pickguard logo and an old-school trapeze tailpiece, it comes on like a great lost '60s curiosity.

Then you give the soundboard a tap and discover that it's made of a Perspex-like material known as Acousti-Glass, and held on to the chambered agathis back by a rubber strip like a spare tyre. We can see Jack White loving this, but visually it's not for everyone.

"The Mondial's neck has a smooth profile curve that combines with great access to get you rolling out the tasty lead licks and crunching thrash rhythms."

It's chunky and weighty on the lap and strap too, and the overall physical impression is far more electric than acoustic. The neck, for instance, has a smooth profile curve that combines with great access to get you rolling out the tasty lead licks and crunching thrash rhythms.

Certain hybrids we've tested fell down once we put our acoustic hat on, with electric-friendly fretboards that can make you fumble your fingerstyle. Granted, it doesn't feel as natural as our trusty dreadnought, but the Mondial is a good all-rounder, with a 54mm string spacing at the bridge that means it feels comfortable for both Dylan and Zeppelin.

When it comes to tone, the Mondial has two separate outputs (Electric and Acoustic) - so you've got a choice. First is the 'wall of sound' approach: stick a standard lead in each output and run the piezo through one amp and the 'buckers through another.

If you haven't got two amps, you could use a dedicated 'Y' cable or a switch box, such as the Morley ABY, to jump between sounds or combine them as you choose. There are certainly a lot of dials to tweak, including a pair of pots (two-band EQ) that let you shape the piezo sound.

As for the tone quality itself, we were pretty impressed, especially with the electric sound. As you'd hope from the odd top material and hollow wings, the Itlaia sounds intriguing in mag mode, with the Wilkinson humbuckers supplying a biting tone that cleans up nicely for mellow blues and jazz (although the difference between the neck and bridge pickups isn't as day and night as we'd like).

Potentially, you'd buy it just for its magnetic performance, but by comparison the acoustic voice isn't as impactful. Maybe it's the relatively slim body or that plasticky top, but booming resonance and woody warmth are thin on the ground.

We didn't miss our Les Paul during our time with the Italia, but we were glad to get back to our dreadnought.