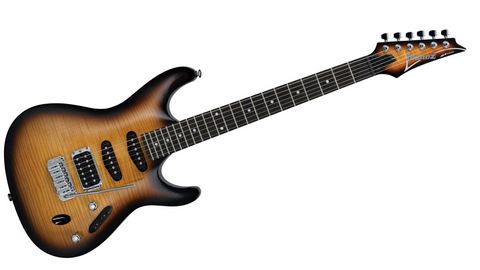 It's a little pricey for an entry-level axe. But if you're serious about braving the road or studio with just one electric, this is well worth the wedge.

Well-heeled purists might sneer about the 'jack of all trade' nature of HSS electrics, but for mere mortals, the versatility and value is a major draw and with the Ibanez SA160FM splicing sounds for under £300, we've got plenty of both.

The finish options are yellow or grey, but Ibanez has the SA160FM pegged as a "chameleon" that swings from "clean rhythm to crunchy blues, all the way out to the most molten of metal".

It's a little pricier than your usual entry-level HSS-configured electric, but to be fair it looks it, with a quilted grained maple cap that looks like a tiger's underbelly, over the desirable mahagony body timber.

On paper, those are similar body ingredients to a Les Paul, but the SA sports a curvy, slim body that makes you feel manly but in control, and a shred-friendly neck that plays like it's been buttered (though the traditional Ibanez double-octave is cut to 22 frets).

Once you're plugged in, this guitar rams home its advantages. There's a sweetness to the tone that comes from the timbers, and the dark and light flavours of mahogany and maple make the single-coils sing and sustain for longer than the skinny body would suggest.

The humbucker offers a joyous, woody, character-rich thump, but what's really cool is when you take advantage of Ibanez's switching system and combine the outer coil of the 'bucker with the middle single, unlocking a scything tone that slices through the mix while maintaining a warm low-end.