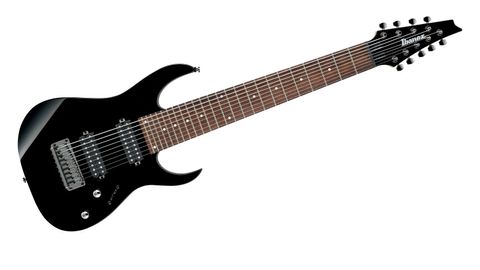 Throw your scepticism aside and open your mind to the power of nine.

When it was first unveiled in prototype form at Winter NAMM 2013, Ibanez's RG9 caused a fair bit of commotion, provoking delirium and bewilderment in equal measure.

We understand the fervour: after all, it has 50 per cent more strings than your average axe. Now available to buy for a surprisingly reasonable price, the RG9 suggests Ibanez is putting its money on a new generation of nine-string players coming out of the woodwork - and hopes that this will be their weapon of choice.

That's a lot of tension, and consequently, the five-piece maple/bubinga neck is supported by two titanium rods, and features dual truss rods for neck adjustments.

The RG series is known for its slimline necks, but - although we can't imagine a nine-string neck getting much skinnier - it's still one hell of an adjustment from a six-string. If, however, you're already over the eight-string hump, it's not that huge a leap, especially when you consider that the RG9's factory tuning almost covers the range of a six-string guitar and five-string bass in one, and as such, invites you to learn a new vocabulary of playing.

An unexpectedly inspiring palette of tones helps to galvanise your riffs. The RG9 has a clever five-way switching system onboard, enabling 'in-between' settings from the QM-9 humbuckers: position two activates both pickups' inner coils for a glassy shimmer, while position four triggers a lower-output, parallel connection of the neck humbucker's coils.

These yield sweeter, lower-output tones than you might expect, which lend themselves to melodic tapping and crystal-clear arpeggios, not to mention convincing bass tones on the lower strings.

Yet this guitar's natural territory is the gained-up, guttural roar of djent, and the bridge pickup capably delivers on this front.

It's not as high-output as an active humbucker, but has more than enough bite and brightness to cut through the dirt - although when you're playing notes this low, you don't need much gain to sound heavy.

Sure, nailing staccato riffs on the low C# takes practice - it's prone to ring out without careful pick-hand placement, while transitioning between bottom-end riffs and top-string solos can be a bit of a struggle, but like any extended-range guitar, the RG9 is very much its own instrument, and requires serious dedication to get the most from it.

Whatever the guitar's merits, the question remains over whether you'd opt for a nine-string over an eight-string - that low C# might be a little too earth-shattering.

Yet the RG9 remains a great compositional tool, able to cover all the bases - and, indeed, basses.