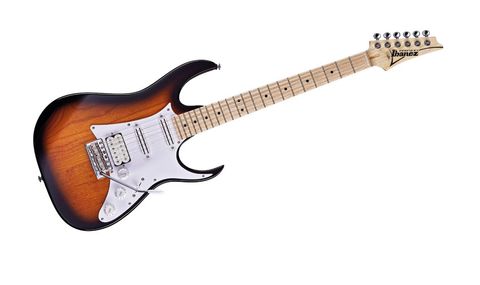 The Ibanez AT10P is an Indonesian-made incarnation of Andy Timmons' high-end signature AT1000CL. Alongside the recently reviewed UV70P and JS24P, it's part of the new Ibanez Premium Series, which centres on the firm's core rock market with a range of guitars built in East Java.

As Paul Oldfield from Ibanez's UK distributors, Headstock, explains: "The quality and expertise that is associated with the Japanese-made Prestige series models has been utilised for the Premium Series guitars to create a more affordable instrument, but still with Prestige-style appointments."

Andy Timmons' refusal to compromise in any regard with quality has led to the Japanese AT1000CL, which at £2,248 is up there with the most expensive Ibanez signature models. Consequently, this Premium Series AT10P, priced under a grand, represents a huge saving.

Headline features are common across the two models. In fact, the only big difference on the spec sheet is the inclusion of the more traditionally styled Wilkinson WV6-SB bridge on the AT10P rather than the higher quality Wilkinson-Gotoh VSVG featured on the higher priced model.

The neck here proves to be a favourite player - it's fairly wide and fat, and loaded with big frets. The pickups comprise Timmons' long-time choice, a single-coil- sized DiMarzio humbucker called The Cruiser in both the middle and neck positions as well as his signature AT-1 'bucker in the bridge. These are selected by a five-way lever (that doesn't offer any coil- splitting options), plus a volume and two tones.

If we're honest, the two-tone sunburst finish here isn't quite as vibrant as that of its Japanese sibling, but we're struggling to find any other significant differences.

Perhaps because of the traditional-style, vintage- inspired vibrato, the AT10P is noticeably resonant and really could be the modern HSS Strat-alike you've always hankered after - imagine a classic Stratocaster, but with an apparent hotter output and darker tonality. The pickups react well to high-end moderation by the dual tone controls and you can mix in some moody low-end to positions three, four and five on the selector: just rely on amp gain to add cut.

For classic rock, the bridge-placed AT-1 is smooth and satisfying, and we find that we don't miss coil-split options too much because the narrow aperture Cruisers have single-coil character aplenty. However, their darker nature and body allow a high-gain amp tone to really sing without perceivable loss of clarity and, if you have the legato chops, you'll have a silky smooth tone worthy of the fusion style Andy Timmons himself so enjoys.