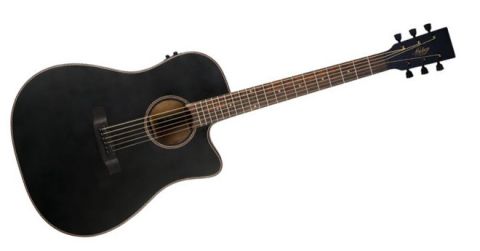 It might not set your world on fire, but as an entry point to the world of acoustics and an advocate for Cranes' own guitars, it's a winner.

Take a stroll into your average guitar shop and, chances are, there's going to be a large range of inexpensive instruments placed not just for beginners but also seasoned players after something new on a budget. All the big brands will be present and correct, but some retailers take things a step further and add instruments of their own. That's exactly what Cranes of Cardiff has done with its in-house Hudson Guitars, a range that can fetch a price as high as £6,500 for a flamed Koa dreadnought, but also a mere £199 for the likes of the HD-100ACE.

Right out of the box, Cranes has already put a big smile on our faces by supplying the HD-100ACE in a hardcase complete with a built-in hygrometer. For the uninitiated, a hygrometer is a device that measures moisture levels.

Excess moisture and humidity can cause all sorts of problems with your acoustic, such as shrinkage in the wood and weakening glue joints. It's essential for a high-end acoustic, but this is the first time we've seen it included with an entry-level guitar. Good stuff.

As for the guitar itself, the template is fairly standard: a dreadnought of laminate spruce and mahogany construction, a matt black finish, and a built-in B-Band T35 preamp.

We have a love/hate relationship with satin finishes - when done right, they're smooth as silk and feel natural to the touch. But in the case of the HD-100, that satin-black paint job is a certified fingerprint magnet, and even after wiping the guitar down several times, we could still see marks and imperfections.

Move on from the cosmetics, though, and the HD-100 makes amends. The neck is thicker and more rounded than a lot of budget electros. It's also topped with 20 well-polished and fitted frets that we could play on for hours - a definite plus for an entry-level guitar.

The tone itself has the low-end oomph we crave from a dread, but it's also very balanced, unlike some budget electros we've tried. There's enough top-end and midrange for fingerpicking and lead lines, and there's a great response to varying levels of attack.

The guitar's B-Band T35 preamp is a popular unit that can be found on top budget strummers from the likes of Tanglewood and Walden. There's a built-in tuner, three-band EQ and volume, and also a phase control to keep feedback in check.

It's not the most inspiring electro sound you'll ever hear, but at this price it does an admirable job of taking this guitar to the stage, or a spot of home recording.

Frustrations with the matt finish aside, the HD-100ACE is a cracking guitar for the money.