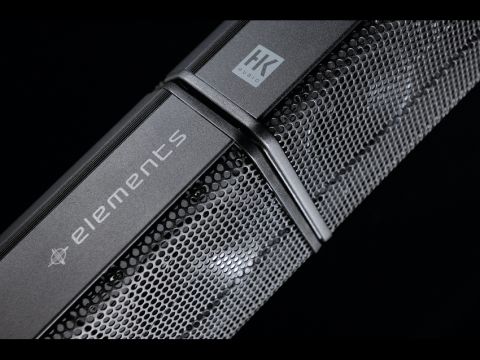 A superb-quality PA system that can grow with your needs.

So, guitarists and PA systems… endless connections, tons of spaghetti leads, big heavy boxes - it's not really a part of the gigging process that anyone relishes, is it?

On test here we have the simple one-bin-and-two-tops system that, when fully erected using the EP1 pole, stands a little over two metres tall.

Setting it up is simplicity itself, the connections between them being made when the components are stacked together - it's extremely neat, and mercifully quick. Our sole concern is if HK decides at some point in the future to change or modify the connection system, this might cause compatibility issues.

At least you know where you are with cables and standard jack/XLR/Speakon connectivity. On the upside, the E-Connect system is incredibly neat: this rig looks about as elegant as a PA ever could.

Integrated into the E110 Sub A subwoofer (the big box at the bottom) is a 600-watt class D digital power amp, which drives everything. Controls and connections are minimal: a TRS/XLR input where you plug in your chosen source, a 'through' port that sends a line-level balanced signal to other Elements amps/powered monitors or what have you, and a Speakon speaker out for connecting further Elements speakers. Just make sure you don't exceed the number of total cabinets outlined in the manual.

Finally, there's a switch to configure the correct output/EQ going to the mid/ high cabinets. Diagrams make sure you can't get it wrong. But what to plug in?

The Elements system is designed to be used with a mixer. The only input gain control is a +4/-10dB switch - use the former for XLR line-level balanced signals from mixers, and the latter for unbalanced 6.4mm jacks, as a general rule of thumb.

After that, it's very simple: Elements is completely at the mercy of your sources. We fed it with a Peavey 16FX desk for a two vocal/two guitar/backing tracks duo mix, and an LR Baggs Venue DI for pure acoustic guitar fun.

The throw from the eight-speaker (four 3.5-inch drivers in each unit) line array is very impressive; it's a superbly balanced sound that might not, on first listen, sound massively loud, but the sheer quality of that sound belies its considerable sonic reinforcement ability.

The spread from the top drivers is impressive, if not ultimately as 3D-like as Bose's L1 model II (which isn't necessarily a bad thing, it should be said). It copes with small-bar duties with ease, and is underpinned with more than enough full, solid bass for the aforementioned duo performance.

There really isn't much more to say - it's loud, it's clean and it reproduces whatever you feed it with. Anything as long as it's not stereo, of course - we're mono all the way with just one amp.

If you do hit the front end of the Elements power amp with too much signal, it has a built-in limiter, denoted by the green signal LED turning red. Brief forays into the red are okay, but if it stays there for an extended period, you'll need to turn down your source signal to avoid compression or distortion.

A lot of us musos are still tied to the big, heavy box solutions to PA. For small gigs however - bars, hotels, what have you - and assuming you're not Motörhead, something like this makes infinitely more sense. You get exceptionally clear and clean sound reinforcement that in this format will suit a duo or small ensemble with aplomb.

As you grow, so can your Elements system, adding amps and cabs right up to a serious 3,600-watt full rock band rig.

It certainly isn't cheap, but it's easy to carry, child's play to set up and it sounds the business