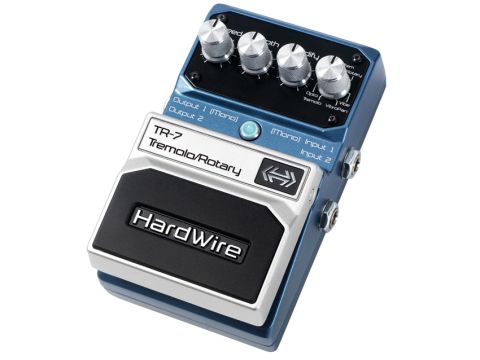 If you're after a versatile trem pedal, give this a look.

Wah, chorus and distortion: some effects are obvious. But a nicely placed tremolo can turn a lifeless guitar part into a rhythmically interesting sonic rollercoaster.

Unsurprisingly, the TR-7 has seven modes, which comprise the standard Tremolo, two vintage style tremolos (Opto and Bias) and Duo (two tremolos running at different speeds). As well as this, you get a Rotary Speaker model, UltraVibe (based on a UniVibe pedal) and VibroPan.

"The different modes nail all of the tremolo sounds you're ever likely to need."

Each mode is controlled by the usual Speed and Depth knobs, while the Modify control serves a as either a tone, waveshape or phase control, depending on which mode you're in.

The different modes nail all of the tremolo sounds you're likely to need, from a modern on-off Green Day Boulevard… type effect in Tremolo mode to Marr-style flutters from the Opto and Bias modes.

DuoTrem is interesting, but novel more than useful. The Rotary Speaker mode doesn't have a two-speed or brake setting, which is a shame because other than this it sounds authentic.

UltraVibe gives you the classic vibrato of the UniVibe à la Pink Floyd's Breathe, while VibroPan offers two vibratos. You can also vary the phase of the two vibrato voices from 0 to 180 degrees. It works best in stereo for a thick dream-like detuned chorus tone.

Admittedly, you're unlikely to use all of the sounds in the TR-7 all of the time. At £150 we'd say it's a good rather than outstanding deal.