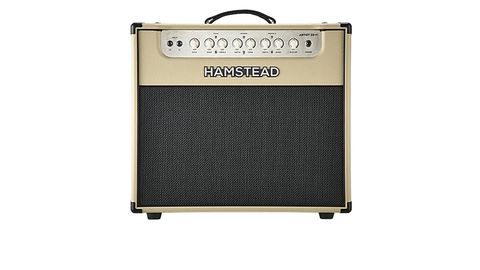 It's a great British amp in every sense, but some may want a lil' more dirt.

British amp building seems to have been enjoying something of a renaissance in the past year or so, with several new brands entering the market. This issue, it's time to feature yet another contender, and one already enjoying a cult following on various social media platforms - from South Cambridgeshire, welcome the Artist 20+RT from Hamstead Soundworks.

Amp designer Peter Hamstead's background in avionics and radar shows in the Artist's construction, with the kind of attention to detail normally seen only on top-dollar American exotica.

The cabinet joinery is very clean, and covered expertly in heavy-duty cream vinyl. The Artist's traditional looks are simple, but executed to a very high standard, with a brushed stainless steel control panel, cream chicken-head knobs and toggle switches for the reverb, tremolo and voice functions. Around the back, you'll find a mains switch, sockets for the Artist's series effects loop, footswitch, extension speakers and a mains voltage selector.

Inside the chassis, the Hamstead's electronics are a mixture of vintage hand wiring and modern PCB construction, with exceptionally clean soldering and wiring, and thoughtful details such as clearly labelled PCB-mounted spare fuses.

The PCB elements are robust and well laid out, while the chassis-mounted valve bases keep the heat under control, and the wiring displays proper old-school valve knowledge.

The Artist 20 is a single-channel design, with a switchable midrange filter that offers a scoop or a peak effect for two distinct voices. There's a gain control that takes the amp from clean to a moderately gritty overdrive, and bass and treble tone controls that interact nicely and work on the right range of frequencies to be effective without overkill.

The Artist also boasts a traditional spring reverb, with level and tone controls; and tremolo, with depth and speed - both of which are footswitchable, along with the amp's series effects loop. The effects are arranged in the traditional order of reverb followed by tremolo, which will please vintage fans, but disappoint those looking for the less dramatic-sounding alternative.

The Artist 20's clean sounds are open and airy, with excellent separation and almost hi-fi clarity; thankfully, the tone controls and reverb add warmth and prevent the Hamstead from being too clinical.

The voice switch goes from a scoop that emphasises treble and bass, to a quite aggressive grunt that sounds good with single coils but might be a little nasal if higher-output humbuckers are used.

The gain control is slightly frustrating - it's mostly clean, with enough to push the relatively low-output pickups of a standard Strat into a mildly gritty crunch when maxed out, but we found ourselves wanting more. It's there if you turn up the Artist's master volume, but only at the kind of volume levels you can use onstage - despite the modest 20-watt rating, this is a very loud amp.

The amp's open sound makes it difficult to pigeon-hole its drive character - there are hints of classic Fender, Vox and Marshall, but no overriding persona, which can either be a good or a bad thing, depending on one's point of view.

The reverb effect is superb, helped by the front-panel tone control, as is the tremolo effect, which can go from slow pulsation to almost LFO territory at its maximum 15Hz speed. You can use them together; the sound of the reverb tail being modulated by the tremolo effect won't be to everyone's taste, although this is the way most classic amps work.

The Artist 20 is a serious professional tool, with a price tag to match. But you're getting real value for your money here, with a build standard and attention to detail that's unmatched by any other British amp in this class.

In our opinion, the Hamstead could do with a little more sonic focus, and the lack of front-end gain could be a frustration, but mainly for those using this amp at low volume.

Used at proper stage volume levels, the amp has more drive, but not quite enough dynamic response to cut through an averagely loud rhythm section.

Nevertheless, for classic roots, pop, country or jazz, the Hamstead is ideally matched and already building itself a serious following. Definitely one to try.