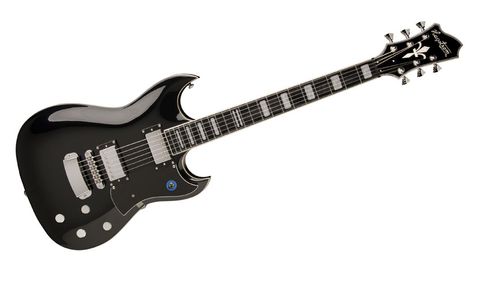 Overall, though, this is one hell of a rock guitar. It feels weighty, has almost over-engineered hardware, and sounds the business.

If you don't know this name, you damn well should. As well as being one third of Foo Fighters' triple-pronged guitar assault, Pat was also in Nirvana and played in the Germs before that. If signature guitars are a reward for influence, Pat Smear has definitely earned it.

Pat is also a long-term Hagstrom devotee, and this guitar makes him the company's only signature artist. You can see him playing his red HIIN on the recently released Nirvana Live And Loud DVD, and if you look closely toward the end of the video for Everlong you'll catch a glimpse of Pat playing a guitar that's remarkably similar to this.

What you get is a mash-up body shape of Pat's HIIN and the modern Hagstrom double-cut, the F200, with a pair of Hagstrom humbuckers (Custom 58s), tone and volume controls for each and three-way switching. Hagstrom's usual appointments of a Resinator Fretboard and its skinny H-Expander truss rod are both present, too.

Smear isn't a shredder (he holds down machine-gun riffs in the Foos) and as a result, his signature model is built for the job. The body is mahogany with a maple cap, there's a military-grade fixed bridge with roller saddles and each string is anchored by a solid chunk of metal, meaning that we had tons of sustain and zero tuning problems during our test.

Those own-brand pickups have the juice to cover a range of tones. We preferred the neck pickup for the clean/medium clean creamy rhythm sounds that Foo Fighters are famous for, or down-tuning and feeding it a dose of fuzz for a wall of overbearing noise. The bridge pickup is a different story, and is where you'll find yourself for overdriven punk chords, punchy rock distortion and out-and-out metal leads.

There are a few potential niggles. First, the placement of the pickup switch. Granted, there's nothing too odd about having a switch in this position, but it's attached to a raised scratchplate, so if you're playing sitting down it's quite easy to knock the switch back to the neck or middle positions by mistake.

Next, the controls are mounted to different points on the carve of the body, so unlike on an SG where they're all sitting at uniform height, these point off at different angles, which might not be to everyone's tastes. Finally, our review model came set up with a very low action - usually a good thing, but it made it quite easy to accidentally fret the bottom string with our thumb.

Overall, though, this is one hell of a rock guitar. It feels weighty, has almost over-engineered hardware, and sounds the business. The fact that it's not adorned with signature branding (bar the blue Germs logo around the pickup switch and Smear's scrawl on the headstock's reverse) means that you don't feel weird playing it. Punk, rock, even the lighter side of metal - this one will keep you going everlong.