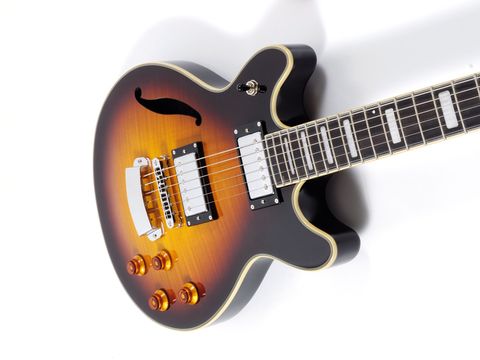 For the money, you'll struggle to find a better guitar than this. A real winner.

It might have a chambered body, but the Hagstrom Deuce F is a monster of a guitar that tips the scales at 3.85kg. That may seem like a deal breaker, but don't be hasty: this brute might just win you over yet.

Playability is up there with the best of them. Hagstrom employs an ultra-stiff trussrod system that enables it to fit slim profile necks that don't compromise tuning stability.

Like all Hagstrom guitars, the Deuce F features a 'Resinator' fingerboard. This is a composite material that offers a feel and tone similar to ebony.

The 'board is studded with 22 well-seated, well-dressed frets.

The Deuce's Custom 58 humbuckers are each wired to a dedicated volume and push/pull tone control. Pull the tone knobs and each 'bucker splits for singlecoil sounds; push it to activate humbucker mode.

The only problem is with the Gibson-style 'bell' knobs: they're tough to pull.

You have to dig the meat of your fingers under the skirts of the knobs to shift them, and even our heavily calloused claws found that a bit uncomfortable after a few attempts. Fatter knobs would make coil splitting easier.

Maybe it's the oversized headstock, the body chambers, the 10mm-thick maple top or the stiff neck, but the Deuce F pumps out an incredible amount of sustain.

It could also be the over-engineered tailpiece that sees each string threaded through its own tone block, which is then anchored to the guitar's body via a thick slab of Perspex.

It works brilliantly, even if it looks a bit bonkers. Luckily, the whole thing is covered by a chrome plate.

Plugging the Deuce F in is a revelation. Stomp on the filth with the bridge humbucker engaged for a fantastic aggressive tone; a thrilling combination of edge and beef that kills for metal and punk.

The Hagstrom Deuce F is an unusual beast, it's a bit on the heavy side and isn't quite as well-finished as competitors such as the PRS SE Custom Semi-Hollow.

However, its incredible tone and sustain mark it out as one of the best affordable rock guitars we've ever tested. If your spine can take it, give it a whirl.