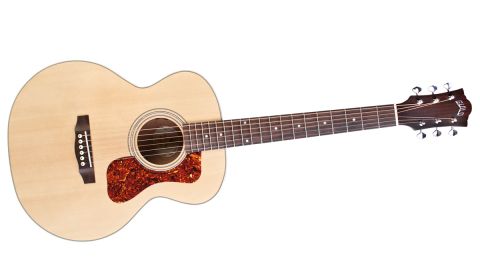 An ideal take-anywhere electro or simply a kick-about house guitar, ideal for the songwriting and recording musician. One to try.

The Guild company finally got its USA factory up and running this year and part of the new acoustic range are the 'Archbacks' - guitars that use a pressed arched back that does away with the need for back braces, just like the firm did back in the day.

The Jumbo Junior takes this concept and brings it to the trendy travel guitar concept.

The Jumbo Junior down-sizes Guild's classic jumbo and creates a very similar outline to Taylor's popular GS-Mini. The good news for us skint troubadours is that unlike the £600-ish Mexican-made GS-Mini electro, the Jumbo Junior, which is made in China and comes with a pretty sturdy gigbag, costs nearly 50 per cent less. We're liking this lil' chap already.

It's certainly a close cousin to the GS-Mini, slightly less deep, with a scale length that's a quarter-of-an- inch longer, and while the headstock apes the classic Guild raised dome style you could easily mistake one for the other.

But it's a tidily built guitar with  a clean Sitka spruce top, slightly scalloped bracing, cream edge binding, simple soundhole rings and a tortie-like scratchplate.  Its arched back and sides are laminated mahogany (there's a maple version at the same price) and it's all finished in a satin sheen.

But it doesn't feel that down-sized when you start strumming. The nut width is 43mm (and has regular string spread of 36mm) and bridge spacing is a roomy 55mm (wider than Yamaha's FS, for example). The neck has a slightly 'V'd profile and generous depth - all good. It's a nice player.

In comparison to our GS-Mini, however, it lacks some low-end depth with a slightly thinner midrange. Re-stringing the Junior with Taylor-like Elixir Nanoweb 80/20 Bronze 0.012 to 0.053 strings sweetens its voice a little - they're not cheap strings but worth the outlay, as they create a perfectly credible, new-sounding and strident acoustic sound.

Plugged in, the AP-1 pickup system seems to over-compensate for the bass-light acoustic voice and some reduction benefits the overall balance. We had problems with the string-to-string balance  of the previous Archbacks we reviewed, but here it's ship-shape and even.

Like the acoustic sounds, it's a little brash-sounding but good enough for an open-mic slot and, with some additional outboard EQ and compression, begins to punch above its price.

Guitars such as the GS-Mini and Martin's Dreadnought Jr might have more obvious appeal but they come at a higher price. There are plenty of other 'minis' out there too, not least from Faith and Vintage, which are more affordable, but this Jumbo Junior remains a perfectly good guitar.