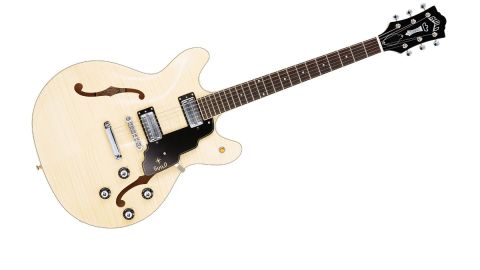 After almost two decades on the fringes of Fender's catalogue, Guild is now under new ownership, and the signs are that the legendary American brand is set to return to the top.

Purchased by Cordoba Guitars in 2014, the deal also means new distribution for Guild in the UK, and the return of the Korean-made Newark Street range of instruments, which faithfully capture the look and style of many classic Guild models from the marque's golden years.

As if to emphasise that things are definitely looking up, the Newark Street range has recently seen two new additions in the shape of the Starfire IV ST and the non-cutaway T-50 Slim, both now available in the UK.

The Starfire IV ST changes the traditional Guild 'harp' tailpiece for a more contemporary stopbar, intended to add sustain and give the Starfire a bigger voice for solos.

Sitting nicely beside the standard Starfire IV and the tremolo-equipped Starfire V, the ST is available in four colours, including this eye-catching flamed maple Natural finish, featuring a three-piece laminated maple neck with a mahogany centre stripe.

Also onboard are dual humbuckers and a conventional three-way toggle switch, with separate volume and tone controls.

The standard of finish is practically flawless, with a deep gloss showing off the movement in the flamed maple. The upmarket look features ivory with black and white purfling to the top and bottom edges, and a single layer of ivory around the fretboard.

Visually, it evokes the classic Guild look, with vintage-correct details such as the round-head pins used for control knob pointers, and open-back Grover Sta-Tite tuners.

The neck, however, has a more modern vibe. Guild describes the profile as a vintage soft U; we'd say it's more of a D, with less meat on the shoulders than many vintage necks.

The other contributor is the relatively high fretwire, which is around three- or four-tenths of a millimetre taller than average. That may not sound like much of a difference, but most players easily detect this small variation.

This neck and fret combination is complemented by the 0.011 to 0.049 gauge strings supplied as standard, adding extra meat for an enhanced tone with the benefit of better tuning stability.

The Starfire's neck joins the body at the 16th fret, which - as you might expect - is a semi-acoustic build, with bridge, tailpiece and pickups all mounted onto its maple centre block.

The guitar feels immediately comfortable to play. Frets are nicely finished with no sharp corners, while the slim neck profile favours players who hook their thumb over the top of the fretboard to grab bass notes.

The slightly higher fretwire makes bending and vibrato easy, even with Guild's standard issue strings, while the slim body dimensions are easy to play seated or standing.

Plugged into a Tweed-voiced amplifier, the Starfire IV has an aggressive, fast attack to chords and picked notes, which overshadows the guitar's sustain a little.

The relatively low output LB-1 'Little Bucker' humbuckers are typical of those fitted to original Guilds, with DC resistances of 7.5k ohms and 5.5k ohms for neck and bridge respectively - a little odd, as we'd normally expect to see the higher resistance pickup in the bridge position.

There's a distinct 'quack' from the bridge pickup, a fat edgy bite from the neck, and a sweet middle position with both humbuckers on: perfect for blues, rockabilly and country picking, as well as big jangly rhythm chords, with a tone that's anchored in the 1960s.

The Starfire has the characteristic bite and twang of the originals, with a dose of extra sustain and a stunning flamed maple finish. The build quality and finish more than justifies the price, which is especially reasonable when you consider that a quality hard-shell case is included. Above all, it's great to have Guild back in the UK - guitars this good shouldn't be ignored.