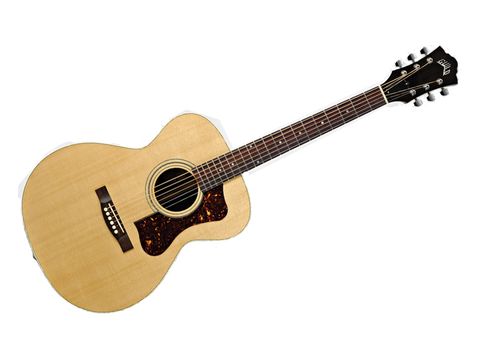 Everything a great dread should be.

Come 2010, the range has moved up a gear with the launch of the six-strong Guild Standard Series. These instruments are 'streamlined' or stripped- down versions of Traditional Series guitars, enabling more affordable prices. Cutaway electro versions of each are due this year.

Along with the rosewood- backed D-50, the D-40 was one of Guild's first dreadnoughts, introduced in 1963. Dubbed the Bluegrass Jubilee (though it was never especially popular in bluegrass circles), it ran until 1992 and was reissued in 1999.

The Standard Series take on the D-40 is stylishly straightforward. The 125mm- deep Sitka spruce/mahogany body is bound in ivoroid with a single black-fibre purfling strip, and ivoroid is also used for the neck's heel capping.

Attention to fine detail is impressive, such as the smoothly polished low-profile nut and fully compensated saddle, very tidy and clean internals, plus an excellent standard of finishing inside and out.

There's also a gratifying absence of finish build-up around the heel joint, suggesting that the body and neck are sprayed separately prior to assembly. One arguable omission is no second strap button, whereas Traditional

Series models include this. For the Standards not to follow suit appears a tad penny-pinching.

Save for wings making up the full width of the rosewood- overlaid headstock, the 650mm-scale mahogany neck is one piece, carrying an unbound rosewood fingerboard with finely dressed thin fretting and an excellent, lowish action.

Span kicks off at a regular 43mm and the flattish 'C' profile, starting at a fairly shallow 21.5mm, is of virtually constant depth up to the now-flatter heel turn.

This provides a comfortably snug grip at all positions. The satin finish feels smooth and fast, while string spacing at the bridge is a regulation 55mm.

The D-40 delivers as a good dreadnought should. It has the requisite power and out-front punch; a healthy bottom end provides a firm underpinning and a becoming hint of growly snap when played hard; and the dynamics are tautly supple with a good sense of headroom.

Some eager dreadnoughts can turn mushy when pushed, but this one maintains an excellent clarity and balance of tone across the strings at all times, blending warmth and brightness in equal measure.

'Standard' could be interpreted as meaning 'adequate', but that's far from the case with this Guild.

Okay, it lacks a few Traditional Series features, but these are essentially cosmetic and don't detract one iota from them being a great-sounding acoustic, simply yet elegantly styled, and crafted to a very high standard.

The D-40 is a pedigree example of its body style, amply demonstrating that in no way is Guild letting its, er, standards slip. Indeed it's very much the opposite.