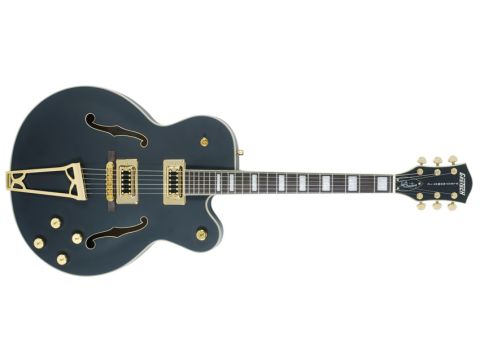 Not a cheap guitar by any means but certainly an essential tool for serious punk rockers.

Following Fender's Hellcat electro-acoustic last year, it was only a matter of time before Gretsch delivered a Tim Armstrong signature model. This one's based around the Rancid frontman's coveted 70s Gretsch Country Club - a right-handed guitar that Tim (a lefty) plays upside-down.

Where Armstrong's acoustic was a relatively budget model aimed at that punk down the pub, Tim has pushed the boat out with his Gretsch. A quick look at the price tag (add £150 if you're a lefty) signals that as well as being armed with three chords and the truth, you might need 12 months' interest free to go with it.

As soon as you get it out of the box, though, you'll understand why. The awesome Urethane matte black finish is similar to Tim's spray-painted job (albeit without the battle scars) and is offset by neatly fitted white binding, bound f-holes and gold hardware.

The maple hollowbody is loaded with a pair of black top Gretsch Filter'Tron pickups, which set the blueprint for the 'in-between' sound of a minihumbucker. Start clean on the neck pickup for a massive rhythm sound; the bass-heavy, woody tone reminds you why hollowbody guitars are so well loved.

Applying some crunch and clamping down some open chords adds to this, while staying tight and maintaining the attack of your notes. Go too far with the distortion, however, and it starts to get mushy.

At this point, it's time to switch to the bridge pickup. Compared to the neck pickup, this one sounds a little weak on our review model. Still, throw some powerchords at it with higher-gain settings and the Filter'Tron bites at your ears harder than Mike Tyson.

Roll the master volume back a bit and jangly melodic lines also ring out well. Clean up even more and you'll reveal a little of the honk-abilly tone that has been drawing rock 'n' rollers to Gretsch guitars for so many years.

We love Rancid, and we love this guitar, but it's not without its faults. It's big and cumbersome with a tendency for it to pull forward on a strap, and it'll set you back a lot of gig fees.

The lack of a Bigsby could be a downer for some and gold hardware is like Marmite, but our review model was set up well with a comfortable neck, great sounds and amazing looks - plus it didn't fall into the hollowbody trap of relentless feedback.

It's clear that while it could have pumped out a cheaper model, Gretsch has created a serious guitar for punk fans.