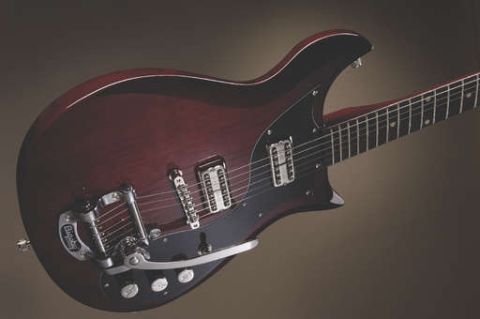 It's great to see the Corvette return to production, and this brash rocker is highly recommended

Gretsch launched the Corvette solidbody line in the early sixties in an attempt to compete with Gibson and Fender's burgeoning sales in that area. Although the original models never quite took off in the way company chiefs hoped, if you can track one down these days you may well find yourself a bargain amidst a rapidly escalating vintage market.

Part of the appeal of this new Electromatic model will be that you just don't see many people playing them, and in an industry with a glut of copies and copyists, this ought to be a big plus for a lot of guitarists.

The earliest Corvette models featured an uncontoured slab body before SG-style chamfers were introduced, while on some examples the rear strap button was set into an indent in the outline and later models featured a curious four-and-two-a-side headstock arrangement.

This new Electromatic interpretation seems largely to preserve its 1963 double-pickup configuration, but thankfully the clunky old flat-arm Burns vibrato that came as standard has been usurped by a licensed Bigsby B50 unit. In combination with an anchored tune-o-matic-style bridge and the three-piece quarter sawn solid mahogany body - not chambered like Gretsch Jets - this results in one of the most stable, smooth vibrato arrangements you are likely to find on any guitar with a Gretsch badge.

Unlike the original model's HiLoTron pickups, the G5135 circa 2007 comes equipped with a pair of new Mega'Tron humbuckers; essentially hotter Filter'Tron-style units. The neck pickup's advanced position should also ensure a tonal palette with a little more zing than some.

The neck itself is glued in, and although the join looks a little fragile in terms of the sheer lack of wood involved, it feels solid enough and there is no undue movement. It's nice to see authentic features like the G-Arrow knobs and locking strap buttons retained as it helps the guitar feel more like a bona fide Gretsch and less like an entry-level sub brand.

Subjected to an acoustic strum, the guitar is balanced and responsive. The Corvette's neck has a slimmer profile than many of its baseball bat-equipped forerunners, which may give the model more mainstream appeal.

Although the accompanying literature claims that there are 22 frets, we definitely counted 21 sections of fretwire on the jumbo side of medium with no sharp or protruding ends. Upper-fret access is superb due to that neck join, and our only criticism is that although the gloss urethane finish is perfectly applied on this example, we can't help feeling that this is something of a missed opportunity as the G5135 would be the perfect instrument for a worn satin finish.

Although the guitar shares an obvious kinship with the Gibson SG in terms of its construction, an initial blast through a crunchy valve combo reveals a brasher, more abrasive tonality from the Mega'Tron pickups than you would expect from PAF-style humbuckers, and it is perfect for aggressive punk and alternative rock riffing, rewarding a hard pick attack.

As far as Gibson reference points are concerned, the sound is closer to the P-90 grind of a sixties SG Special, although there's enough of that distinct Gretsch character to allow you get into convincing Malcolm Young territory.

With the gain rolled back a little, there's less bass and lower mid response from the Mega'Trons than your average humbucker and more high-end definition, which lends itself perfectly to shimmering Bigsby wobbles and works well in combination with either a little slapback or longer delay times for spacier leftfield soundscapes.

One of the major pluses is that while there is no shortage of high-end from the Mega'Tron units, it is a detailed and musical tone rather than shrill and harsh.