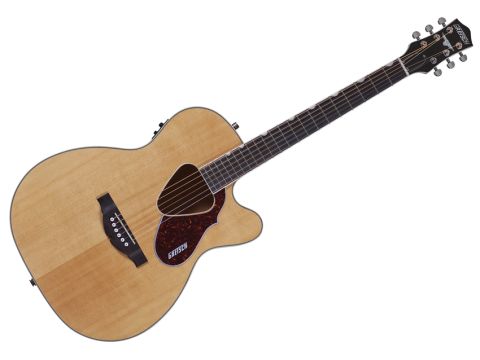 If you're looking for something outside of the norm that can still do the business when required, this could be just the ticket.

If there's one thing the Rancher Jr definitely is, it's a Gretsch.

The glossy black headstock, the classy thumb print inlays and extravagant strap pin: so far, so Gretsch-y. But you may have reservations.

"Tonally, the Rancher is bright and zingy, chiming out with big open chords and surprisingly loudly for such a diminutive body. "

Yes, there's a triangle where there should be a circle. That alone will be enough to frighten off some people. If that doesn't, then the flying sheep head on the headstock definitely will.

If the looks of the Rancher aren't for you, nothing's going to convince you otherwise. But you'll be missing out.

Taking it's name and looks from a Gretsch model in the dim and distant past (in this case, the '50s), it's had a few touches added to keep it affordable and practical - such as onboard electrics and laminate construction - and it's a thoroughly modern guitar.

It's a great little package, little being the operative word; its compact size means it's light and loads of fun to play standing up. Tonally, it's bright and zingy, chiming out with big open chords and surprisingly loudly for such a diminutive body.

The laminated top, back and sides are a cost-cutting measure that many of Gretsch's competitors at this price point have managed to avoid, and it's certainly a mark against the Rancher. Regardless, it's a flexible guitar, rugged enough to handle frantic strumming yet with enough clarity for picking, making it well suited for players who like to dabble in different styles.

The Fishman electronics are all class, the under-saddle pickup producing a swell of acoustic warmth that's easily controlled from the preamp. Bass and treble controls are accompanied by phase, which plumps up the bottom end at lower volumes and helps keep a lid on feedback if you want to crank it up.

The slender rosewood neck, all tarted up with those pretty inlays, isn't ideal for bigger hands, but it's smooth and snug enough. The cutaway gives you easy access to the top frets, and the chunky retro-styled scratchplate could stop a direct hit from a howitzer.

It's the details that make Gretsch guitars unique, and the Rancher Jr is full of them, from the flawless binding and finish to the solid strap lock. There's only one of those, though, because the jack also doubles up as a strap button at the base of the body, but at least you'll be half secure. Which has to be better than not at all, right?

If you're considering a Rancher, there are certainly a few points to bear in mind. The laminated construction hasn't had too much of an adverse effect on tone, but at close to £300 there are plenty of equally pretty and well-equipped acoustics boasting solid back and sides.

Ultimately, the devil is in the detail. This, as we've already established, is a proper Gretsch. And with that name comes certain standards, standards that the Rancher effortlessly lives up to.