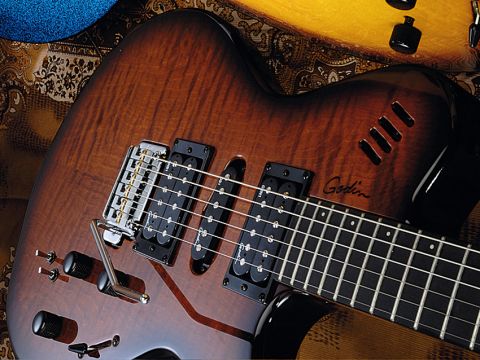 Not all players need synth access, it's here if you want with acoustic and electric voices. A do-it-all from Montreal!

Godin may not be as well known in the UK as some of its North American counterparts but, over the 20-odd years since the company was founded, it has become a respected brand admired for its innovation.

The stated goal is to find the perfect balance between the finest traditions of guitar crafting and new design concepts and the company has, for example, been at the forefront of building guitars that offer acoustic tones from bridge transducers alongside the standard electric sounds.

The xtSA is a showcase of Godin's design ethos: a 'three voice' guitar that not only has electric and acoustic sounds onboard, but also functions as a synth controller via a standard 13-pin output that will connect to a Roland guitar synth or others that use the same protocol.

With all the controls needed for the three voices there is the potential for confusion, but Godin is well practised and has created a user interface that is uncluttered and easy-to-use with a combination of 13-pin output plus two jacks that allow either mixing or separation of electric and acoustic sounds.

Electric guitar sounds are governed by volume and tone knobs, plus a pickup selector, while four small sliders (volume, bass, middle and treble) control the acoustic part of the sound. For the 13-pin output there's a three-way toggle switch that selects synth only, audio only or a blend of the two, with the volume of synth sound in the mix being controlled by an adjacent knob. A non-latching toggle switch is used to step through the patches on any connected synth unit.

This guitar is all about versatility with the electric pickups providing the full range of Gibson and Fender-like tones that might be expected from a H/S/H combination. The acoustic-like tone is both jangly and full with plenty of available tonal variety and does a convincing enough emulation of a modern, bright acoustic for onstage use.

As for the 13-pin output, the tracking is excellent with instantaneous response, which is all you could hope for - the synth sounds are up to you!

For the ultimate in versatility, though, the xtSA is a guitar for those of you who need a large variety of sounds on a single gig, but can't take several guitars. There are other alternatives, of course (you could fit a hex pickup to a favourite guitar and use a Roland VG system), but the xtSA is an elegant solution that not only does a lot on its own, but can also directly interface with a VG system for ultimate flexibility. It also has great potential for sculpting hybrid tones - a great asset in the studio.