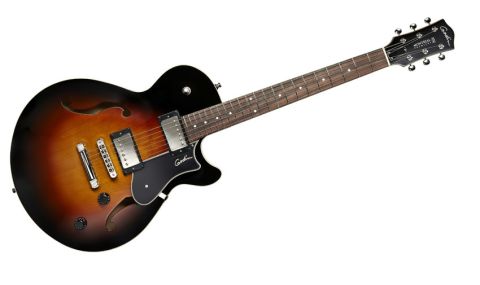 More often than not, Godin creates trends rather than follows them. Here is a case in point: a new spin on the centre-blocked semi that looks old-school, but sounds more contemporary.

The Montreal Premiere was unveiled in January at the 2013 NAMM show. This is a departure for Godin, and isn't part of the 5th Avenue range. Instead, it sits in the upmarket Signature range - along with the now discontinued previous Montreal models and the still current hybrid Multiac Jazz.

It might use the name of a previous model, but the new Premiere is a very different guitar - not far off a single-cut ES-335 with a unique centre block design.

Of course, like an ES-335, the arching is created not by carving solid wood but by the curve of the pressed laminates. The sides, however, appear to be quite thick - there are no linings to maximise the gluing area as you'd normally see.

Through the 'f' holes you can also see what Godin calls its 'breathe-through' centre block. Made of spruce, not the usual maple or mahogany, the block runs from top to bottom of the body but only fully connects with the top. Three arched cut-outs allow air to pass through the block so it connects less with the back - like the feet of the spans on a viaduct.

"The top, back and sides are in fact laminate Canadian wild cherry over a very interesting internal structure routed out of a block of Adirondack spruce," explains Godin's Richard Bunze.

"This ends up shaping the entire body of the guitar and essentially becomes the guitar's 'skeleton', where the wild cherry laminate becomes - continuing the anatomical references - the 'skin' of the guitar over the skeleton. The carved 'breathe-through' core is really the heart and soul of this instrument. It allows the air to travel freely through and under the block from one side of the body to the next. This is crucial to promote air-flow, giving the guitar a very vibrant feel and increased resonance."

It's a very clean construction: the edges of the 'f' holes are neatly painted and the cream binding around the top and back edges is very crisp. The old-style brown-to-black sunburst is only applied to the top; the back, sides and neck are all a mid-brown mahogany-like colour, although you can see the whiter colouration of the wild cherry through the f-holes.

The neck joins the body bang on the 15th fret, has a compact heel and a medium depth (22mm at the first fret, 23.8mm at the 12th) that's a good palm- full, without feeling overly big. Here, the frets are medium jumbo and nicely polished and finished, while the unbound rosewood board, with a striped mid-to-dark brown colouration and simple pearloid dots, uses a Gibson-style 305mm (12-inch) radius that matches the Gibson-style 628mm (24.75- inch) scale length. The black- faced, back-angled, scarf- jointed headstock certainly suits the style of the guitar.

Tuners are vintage Kluson-style, and while the tune-o-matic and stud tailpiece setup is common enough, here the bridge is Graph Tech's ResoMax NV1 design made from a lightweight 'ResoMax' alloy (including the saddles) intended to "enhance harmonic content and keep the 2kHz bite of a metal saddle"; it also features a magnetic lock (four small magnets are buried in the underside of the bridge ends) that holds it in place if you remove all your strings.

A rounded shoulder is the ideal place for the dual pickups' toggle selector switch, we just have a single volume and tone - not the Gibson four-control standard - and the classic- looking covered pickups are simply referred to as Godin Custom humbuckers.

Removing a pickup reveals they are made by Korean brand G&B, which supplies numerous guitar companies, not least PRS's SE range; Godin informs us it uses Alnico 5 magnets.

The unplugged response of the Montreal is revealing. It's fairly quiet, but with decent sustain and a very sprightly, even tone, unlike the more midrange-y voice of a good ES-335 unplugged.

Listening clean to the neck pickups, the Montreal is thick and plummy, but with an articulation that will appeal to players using more complex chord voicings. It seems unaffected by any feedback until we get to pretty loud levels - even then, although the guitar certainly becomes very lively, it's reasonably controllable and easy to coax into harmonic feedback.

It certainly veers on the more 'acoustic' side; there's less solidbody character to the sound than a contemporary ES-335, whether it's the pickup's voicing, the spruce centre block or indeed the Graph Tech bridge. But there's a crisp, almost crystalline character to the sound that sounds perfect with modern modulation and delay effects, though even with some tone roll off doesn't really nail that rounder-nosed classic Gibson- style semi tonality.

Certainly, comparing it with a variety of semis from Fret-King to PRS, it emerged with the most pristine clarity, especially that bridge pickup. To our ears then, the Montreal Premiere sounded at its best on the cleaner side of the tone tracks: more Fender-y and Grestch-y perhaps than classic Gibson. It makes the Bigsby option an appealing prospect.

At the quoted suggested selling price (SSPs) this Godin represents excellent value for money. Godins have a very workmanlike feel that reflects both their price point and intention: they feel like working guitars, not collectables.

The Montreal Premiere, like many modern semi-solids, is very hard to pigeonhole: its semi aesthetic seems applicable to virtually all styles, a very classy, retro-looking guitar but with a contemporary, clear, balanced and breathy tonality.

Add in great playability, light weight and lively resonance and you have a very appealing instrument. But it doesn't really nail that rounder-nosed Gibson ES-335-like character, and maybe a different spec pickup or a different 'breathe-through' core could be an interesting future option.