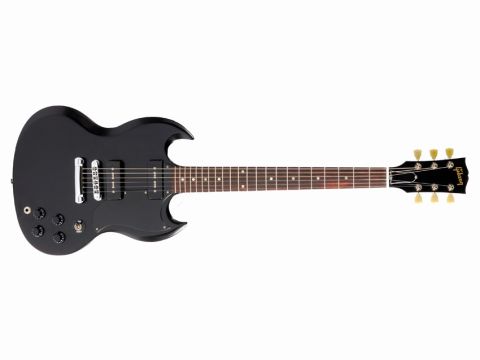 Raw, inspiring and very cool - buy one and, we suspect, it will be a keeper.

These are good times to be a Gibson fan. The company still has Custom Shop models that cost the equivalent of a small defence budget, but its entry-level offerings, like this SG Special, are increasingly affordable.

It features two hard-charging P90 pickups and has a SlimTaper neck that apes the feel of classic '60s-era Gibsons, promising more potential for noodling than the back row of the cinema.

But perhaps the most significant feature is the price. At £699 it's within reach of players who can't afford exotica.

The SG is known as a lightweight, comfortable guitar and this is no exception. Strapped on it feels instantly at home and, at just under 3kg, should prove popular with players who suffer with backache after long stints onstage.

Unlike some SGs, it doesn't feel neck-heavy, while the first few strums reveal a speedy action that calls for heavy riffage. The SlimTaper neck, which has a comfy, flattened C-profile, is a breeze to get around. But if you've got plump fingers, you may find the fretboard a touch too narrow.

Because you've got singlecoil P90s rather than humbuckers here, think Neil Young rather than Angus Young in terms of tone. Riffing is a pleasure: dig in and the bridge P90 gives an aggressive bark that's full of woody mids. Strum gently with both pickups selected and you're rewarded with a rich, resonant shimmer that hangs in the air for a good while. The neck unit on its own is pure, molten blues.

Both pickups have plenty of oomph and will drive amps into the crunch zone quite easily. The overall effect is unadulterated rock 'n' roll, and if you don't feel a Who-style windmill coming on when you play, you should probably take up stamp collecting instead.

Entry-level Gibson models can sometimes feel a bit underdressed in terms of cosmetic glitz and this is definitely a no-frills axe. The matte-black nitro finish is plain but satisfyingly badass. It's designed to promote natural wear and ageing, and as such it will be susceptible to battle scars.

Overall, its stripped-down vibe feels purposeful rather than cheap. There is one blemish that is less welcome, though: there's a slight lip between the upper edge of the fretboard and the neck near the 12th fret. It doesn't interfere with playability or sound, but you wouldn't expect to find this kind of issue at this price.

In some ways, you could call this Gibson's answer to the Telecaster: it's direct, uncompromising, but raw and exciting in a way that lesser guitars fail to be. It only gets marked down for a small lapse in finishing that really shouldn't be there on an axe that costs the best part of £700.

Despite that, it remains a guitar that inspires with every strum and that has the magic ingredient so many guitars lack - pure mojo.