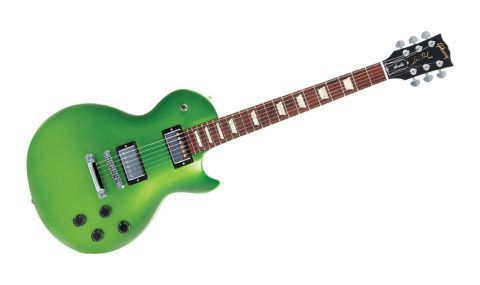 We have to give credit to Gibson on this one. The Nitrous looks good, it feels good, it sounds good, and it even smells good. To our mind, this is somewhere between marshmallow and butterscotch, and that smell hits you as soon as you open the case. Cheap guitars simply do not smell as tasty as this.

It's a perennial problem for Gibson, especially with the Les Paul: how do you wring new marketing angles out of a design that reached perfection in the 1950s? This time, it's with the addition of four new finishes, and a coil-split option on the bridge and neck humbuckers.

If you're bored with the 'burst of old-school LPs, perhaps the bright, muscle-car inspired finishes and more aggressive humbuckers of the Nitrous Les Paul Studio might tempt you into the Gibson fold? All the hardware you'd expect from a Les Paul is present and correct, in the sort of shiny chrome that wouldn't look out of place on a hot rod's bumper.

Despite us inspecting it with all the dilligence of Sherlock Holmes after three cans of Red Bull, we couldn't find a single rough, sharp or dodgy surface, edge or fret end, which is what we'd expect for over a grand.

The pickups come from Gibson's Modern Classic range, and are both hotter than the classic-rock humbuckers we're used to hearing on record. This is especially true of the bridge 498T pickup, which is a lot more eager than the neck unit to push into distortion.

Let's disabuse Gibson's marketing department here: the coil-split humbuckers run together in single-coil mode emphatically do not produce a country-style twang. Don't buy one of these if you think that you'll be able to get a Fender-style scooped-out woody sound, because you just won't: the longer scale length of those guitars and the different tonewoods mean that you won't get the same sound out of the shorter strings of a mahogany-bodied Les Paul. But do we care? Not a jot.

Delete the possibility of Telecaster twang from your mind and think of the coil-split as merely another option in the sonic palette, and it all makes sense. Dropping to single-coil mode gives short, stabbing chords a more percussive nature, and gives you another option when you're playing on the edge of your amp's break-up point.

The two single coils together produce a thin, grungy sound, and you can experiment with using one full humbucker and one coil-split humbucker together to open up a whole load of sonic possibilities.

Sir Les of Paul envisioned the guitar that bears his name as a silky jazz machine; only later did it become the chosen axe of blues and rock players. The clean tones on the Nitrous don't have the same mellow quality that he would have wanted, but that's not the point: if it's not brash and crunchy, you should be playing another guitar.