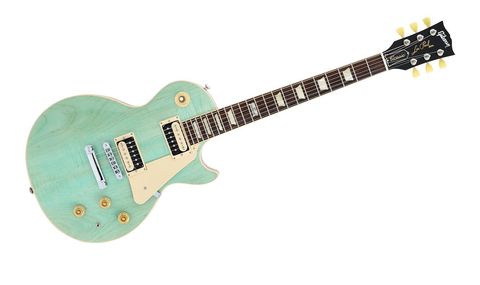 Fresh from our inspection of the Gibson 2014 Les Paul Standard comes the Classic. Here's a Les Paul for the modern guitarist; its raunchy image is just the tip of the iceberg for a guitar that's the nearest thing to a 'Formula One' Les Paul yet.

If you think of the Les Paul Standard as an ongoing work in progress, then imagine the Classic as the Standard you've pimped; a modernised, harder-edged version, if you will.

Maple, mahogany and rosewood continue the construction theme, but differences abound on closer inspection. The casual observer will notice a set of zebra humbuckers in cream surrounds, perfectly complementing the guitar's other plastic parts.

The pickups are '57 Classics. Independent volumes are retained; both are on push-pull pots and again, these activate coil-taps. Combining two tones into a single master leaves a space for the Classic's secret weapon - an active 15dB volume boost switch.

What's not on view here is the weight-relieved body, which eases the shoulder's burden without drastically altering the sound. It's two-piece, but the timbers are well matched, so the join is hardly visible.

Hardware is straightforward, with Tone Pros green-button tuners and a Nashville-style Tune-O- Matic bridge and stud tailpiece. In addition, the Classic sports Gibson's larger strap button design - a much safer option than those tiny vintage ones.

One gripe comes with the mid-boost's awkward battery compartment release; should guitarists (who regularly use their fingernails) be given something that threatens to break them every time a battery needs changing? Surely a 'push release' type would be better.

The Classic's neck seems made for speedier techniques. Its slim and therefore wide feeling early 60s profile wouldn't actually feel out of place on a far pointier guitar, as the shallow 'D' lends itself to 'thumb behind the neck' playing and fast, three-notes- per-string licks.

The new fretting style, Plek setup and pleasing attention to detail give the Classic a different, but nonetheless rewarding feel.

Using a Fender Blues Junior as test rig and the recently-reviewed 2014 Les Paul Standard as a comparison, we plug in. While not overtly louder, the Classic seems more directional and mid-focused. This chimes with the higher output and the Standard's chambered body; the Classic is more 'in your face'.

Coil taps elicit a Les Paul 'light' array of sounds. Flick the boost switch and the tone stays, but things get bigger, as though you've jumped on a moderately driving Tube Screamer. It's a great-sounding circuit that pushes rhythm into crunch and crunch, in turn, into soaring solos.

It's easy to focus on Gibson's LP Reissues to the exclusion of all else. Yet this instrument shows Gibson is far from stuck in the 1950s. The Classic has strengths that any tone lover with an eye on modern, powerful soloing will love. Its skinny neck, big sounds and confident gait mark it out as a modern titan of the breed.