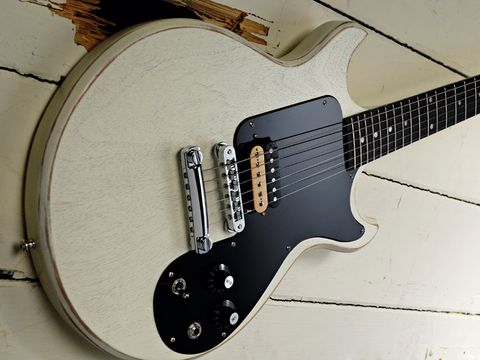 The first thing you may think when you see the new Gibson Joan Jett Melody Maker is, 'What a damn fine looking guitar.' You just might follow that up with, 'Er, so who's Joan Jett?'.

Probably best known as a member of all-girl punk legends The Runaways, and for her eighties hit I Love Rock 'N' Roll, Joan links the seventies glam of Leather Tuscadero from Happy Days (ask your folks!) with today's punk rock goddesses like Brody Dalle and Allison Robertson of The Donnas.

If you need to know any more about the Jettster, try Wikipedia… we've got a guitar to test!

The Gibson Melody Maker was originally launched as a single cutaway Les Paul style model in 1959. Designed as a student guitar, it later became popular with 60s garage punk bands and is now an affordable classic.

Joan's signature Melody Maker is based on the double cutaway model launched in 1961. A reissue of the '59 model with a singlecoil pickup is currently available at £399. Like Joan's guitar, it's made in the US.

Jett's Melody Maker is like a muscle car. The slim mahogany body exudes 60s cool but there's some serious firepower under the hood. When Joan bought her MM in 1977, she fitted a Red Rhodes Velvet Hammer humbucker in place of the singlecoil.

Gibson has replicated the hot output of the Rhodes item on her signature with its own Burstbucker 3. Other cool details include a reassuringly sturdy kill switch and a thick black vinyl scratchplate.

You also get an ebony fingerboard, 'witch hat' control knobs and a set of Grover Mini machineheads. The whole package is topped off with a worn white finish that helps add to the guitar's vintage vibe.

If you were intent on improving on the simple brilliance of a vintage Melody Maker, you'd have beat it to hell and fitted a hot humbucker. Joan's saved us a lot of trouble, then.

The guitar is lightweight, balances perfectly on a strap and plays great straight from the case thanks to its slim C-profile neck. After some initial tuning problems, which were solved with a bit of judicious string stretching, our time with Jett's baby was all gravy.

The star of the show is the Burstbucker 3 humbucker. Basically an over-wound PAF, this beast can be a bit spiky played clean - backing off the guitar's volume control a touch helped - but the overdriven tone is boss, something like a great SG, in fact.

The kill switch is fun. Get some squealing feedback going and flick the switch back and forth for some Pete Townshend-style Morse code mayhem. Yep, we love this guitar.

In I Love Rock 'N' Roll, Joan Jett encouraged us to "put another dime in the jukebox, baby". Sod that! For the foreseeable future all of our loose change will be going towards buying her brilliant new signature guitar.