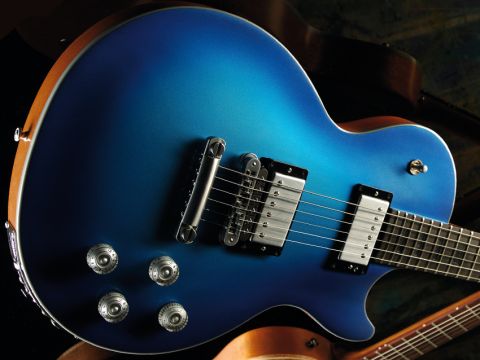 We really see the HD.6X-Pro as a studio tool, and not only is it unique but the ability to separate the strings and treat each as an individual entity will open up a whole new world of guitar sounds that have never been heard before.

If asked to invent a dramatically different Les Paul we doubt anyone could have imagined this utterly modern version of Gibson's iconic guitar.

Okay, so we've known about the Gibson digital guitar for a while but we were beginning to wonder if it was more fantasy than fact. Gibson has finally offered it for sale and the nattily named HD.6X-Pro aims to blend tradition with cutting-edge technology.

A Les Paul to meet the new digital frontier head on and which will no doubt polarise opinion. Let the debate begin…

The HD.6X Pro does one major thing that no other guitar does: it can output the sound of each of the six strings individually. Not a very practical proposition for the gigging guitarist, but with the capability to adjust the volume, panning and EQ of each string individually, and to apply completely separate effects processing and amplification to each string, the whole panorama of guitar sound has suddenly expanded.

Separating the strings to such an extent has not been done before. There have been 'stereo' guitars, the most complex of these probably being the mid-eighties Ripley Stereo (as used by Eddie Van Halen on the song Top Jimmy) that fed the output from what the company said was a separate humbucker for each string via its own panpot to a stereo output.

It wasn't an exact science; the quoted actual string separation on this Gibson is 90dB - effectively meaning that when an individual string is sent to a separate output you simply do not hear any of the other five strings.

The HD.6X-Pro is basically two guitars in one - it is a conventional Les Paul complete with a pair of humbuckers and the usual array of controls at the same time as being an instrument that can output a digital signal from a hexaphonic pickup. It can produce both sets of sounds simultaneously, in fact.

The hex pickup is close to the bridge and on the elongated silver jack plate the standard jack sits next to an Ethernet port for the digital output, a mini-jack mic input (for a headset mic) and a mini-jack headphone socket complete with knurled-wheel volume control to monitor the sound.

Onboard the guitar is an analogue-to-digital converter that takes the signals both from the hex pickup and from the humbuckers and converts them to 24-bit digital audio to be transmitted via a Cat 5 Ethernet cable to a Breakout Box. The digital signal is completely free from interference with no noise or dropouts and can be transported for much longer distances down an Ethernet cable than would be possible with a standard guitar lead.

The powered Breakout Box (BoB) is the input/output hub for the system. It takes the digital signal from the guitar and converts it back to analogue again so the audio can be sent to separate amps or separate tracks of any recording setup. There are three options available on 6.4mm jack outputs for the output from the hex pickup - each string can be sent to a separate output, you can have stereo sound with strings 1, 2 and 3 out of one output and 4, 5 and 6 from another or you can have a mono output with the sum of all six strings.

In addition to this there is a mono 'Classic Mode' output jack that outputs the previously digitised signal from the traditional humbuckers now back in analogue form again. This is an alternative to just taking a signal directly from the guitar's normal jack output, the advantage of it being that longer cable runs are possible due to the use of Ethernet cable. Another output jack on the BoB handles the signal from the guitar's mic input. Left and right input jacks on the BoB can send a signal (most probably the output of a computer's audio interface) back up the Ethernet cable to the guitar for monitoring through the headphone socket.

Cosmetically the HD.6X-Pro has its own aesthetic with its cobalt blue burst finish complemented handsomely by platinum-finished speed knobs, hardware and truss rod cover. The cylindrical knurled tuning machines are a departure from tradition, as are the reflective carbon fibre fretboard markers. The whole package - guitar, Breakout Box and leads - comes in a plush-lined hard-wearing case with airport-friendly wheels.

The HD.6X-Pro plays and sounds like a Les Paul. The well-finished frets and ebony fingerboard make playing a breeze and all the classic twin humbucker tones are present and correct.

A smart blue LED next to the neck pickup lets you know that the Ethernet connection is powered up and the bridge pickup volume knob doubles up as the volume knob for the digital output. First impression of the hex pickup is that there is a load of dynamic range to track every nuance of your playing: the whole thing is latency-free and there is no need to adjust your playing as you might do with pitch-to-MIDI conversion.

The sound is also clearer and somewhat brighter, by design, than you might expect from a standard direct output from a conventional guitar - the idea being that a full clear sound gives more potential for manipulation further on up the signal chain. By contrast the classic mode sound that is digitised from the pickups is darker and more conventionally Les Paul.

Using all six separate outputs into a multi-input audio interface we were able to record a selection of playing to six separate tracks and then manipulate them. The obvious first thing was to pan the six strings fully across the stereo image creating a completely different kind of stereo spread - a sound with a great sense of movement that gave the impression that more than one guitar was playing.

With a powerful computer-based recording system well equipped with plug-ins there are almost unlimited possibilities. It is possible using AmpliTube, Guitar Rig or any other amp simulations to apply different amp and speaker combinations to each string or different amounts of drive from the same amp... bring in various effects and the options just multiply.

Another creative opportunity is to record the guitar and then mute the audio from one or more strings at various points creating a new part that would have been very difficult or impossible to play conventionally. The classic mode full six-string sound can be recorded on its own track alongside the six individual strings so is there to be used, even if just as a reference.

Feeding the output of the computer back up the cable to the guitar for monitoring on headphones worked a treat with no apparent latency delay, even playing live through the plug-ins.

The fact is that the signal is converted from digital to analogue in the Breakout Box then has to travel in analogue form from Breakout Box to the computer's audio interface to be then converted back to digital again - doh! And if you are going to record all six strings to individual tracks then you need an audio interface with at least six analogue inputs and six jack to jack leads to connect it all up - Gibson supplies six colour-coded leads with the package but it's hardly elegant. This is a digital guitar so wouldn't it make more sense if it could connect to a computer with a single cable and the signal stay in the digital domain all the way there?

The fly in the ointment is that the MaGIC technology is, so far, only utilised in the HD.6X Pro - there is, as yet, no computer interface that can take the MaGIC signal. For now we are stuck with the clunky interfacing and cable spaghetti. This doesn't dilute the potential but it does illustrate the perhaps uncomfortable truth that the HD.6X-Pro package is a pioneering first step on the way to a refined and integrated digital guitar system, rather than the finished article. It's so far ahead that it is waiting for others to catch up.