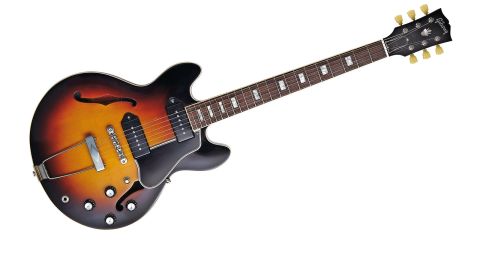 If you don't want the bulk of the ES-330, but still hanker after those hollowbody P-90 sounds, this is for you. It's great value, too.

The Gibson ES-390 is full gloss with white, untoned bindings, but even so, the dark 'burst finish is beautifully old-school, and while to some Gibson's finish might lack the precision and dipped-in-glass look of more contemporary makers, it's part of the vibe.

The neck backs feel a little sticky, too, yet playability, set-up and sound are all what we'd expect from this premier brand: superb.

In the large-bodied company of the rest of Gibson's semi-acoustic line, this contemporary ES-390 looks like a toy. Downsized it may be with its 355 x 420mm size body, compared to the ES-335's 405 x 485mm bulk, but for many players it might well be an extremely valid musical tool.

First off, without the V.O.S. treatment found on the firm's other Memphis instruments, just a standard glossed nitrocellulose finish with shiny nickel-plated hardware, Gibson somehow manages to trim nearly £1,000 off its retail price. That's a considerable sum for most of us.

The scale length remains identical to its bigger brothers; we have the 19th-fret neck join, too, and the small block inlays of an ES-335, single-ring Kluson tuners, a locking Tone Pros tune-o-matic, trapeze tailpiece like an ES-330, and dual P-90- style pickups.

These are the Memphis Historic Spec (MHS) with standard ceramic tone caps, as opposed to the historic larger 'bumble bee' caps of the other guitars.

Nut material is more contemporary Corian rather than the nylon of the others; nylon is used for the bridge saddles on the humbucking guitars, while the two P-90 guitars have metal saddles.

Apart from being much more manageable, another upside of the downsized body, in theory at least, it should mean a higher feedback threshold. We'll see...

Strapped on or seated, it's hugely comfortable, a lovely lightweight, balanced guitar that is slightly more generic and direct-sounding than our 1959 ES-330 TD comparison model but has easier playability in the upper positions.

There's a little more 'push' to the sound, but it covers all the bases of the ES-330, albeit with less old-school charm; it's more contemporary. The smaller body chamber means, acoustically, it's not quite as bass-y or voluminous.

We're rather in love with this, and would love to hear it with the slightly more open, detailed underwound P-90 Dog Ear pickups of the ES-330 - adding gain, this guitar's pickups are also slightly microphonic.

The ES-390 wins on sheer value: if you're not obsessed with the physical size of the original thinline models, this packs an awful lot of characterful sound, playability and manageability into a very tidy package.