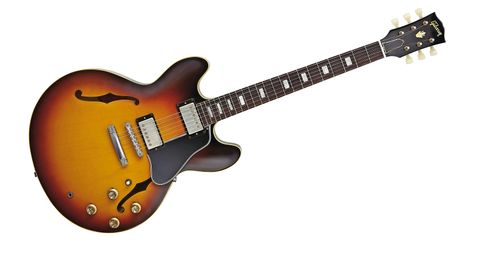 If you've ever wondered what the fuss is about, track down one of these guitars: the ultimate genre and style-spanning tone machine.

While Gibson's original 1958 dot-inlaid unbound fingerboard ES-335 is ultimate vintage spec, this one aims to recreate the equally short-lived second variation - from 1962-64.

Modern Gibson is split into three distinct divisions. The meat-and-potato electrics, which start at around £600, are the responsibility of Gibson USA. The higher-ticket historic and reissue solidbodies and occasional semis are handled by Gibson Custom, while the home of the contemporary semi is Gibson Memphis, and it's the latter we turn the spotlight on.

The 50th Anniversary 1963 ES-335 adds small block inlays (fingerboard binding was added in late-1958) and the narrower horns which, in combination with the 19th-fret neck-to-body join, add up to the ultimate player, especially if you want to explore the full range of the 'board's 22 frets.

Our sample is a shade lighter than the ES-345 we had on hand to compare (also from Gibson's Memphis range); those less showy small block inlays and nickel hardware impart a less decorative appearance.

Acoustically, it sounds a little plinky and honky, but with it old, and very 'Gibson'. The neck is that beautiful full C that fills out in a really good way as you move up.

Starting clean and moving through the sounds, that polite acoustic tone is transformed into some bright-edged throat from the bridge pickup.

It's one of the most soulful mixed-pickup tones you'll hear, and the neck pickup has clarity in the high end and a superbly velvet texture that, in higher positions, has a soft-nosed, yet not dull, bell-like clarity.

It doesn't have the closed focus of a Les Paul - almost as if we've stretched the frequency range, high and low, and opened out the midrange. There's plenty of semi-like 'cloud' in the lower mids, but it's all part of the character.

You want smooth? The neck pickup, with a little volume and tone roll-off, has it in heaps; but kick in a little crunch, wind the controls up and you're in classic Clapton/Cream mode with musical feedback under easy control.

Aside from Fender-like single-coil bite, there's barely a sound you can't get. But having said that, by pulling down the volume on the bridge pickup and kicking in a level boost... well, you wouldn't get kicked out of Nashville.

There are superb dynamics, too; it's a wonderfully touch-sensitive guitar right across its considerable range.

All in all, it's an absolutely stunning instrument in every respect and it's the best contemporary example of an ES-335 we've ever played.