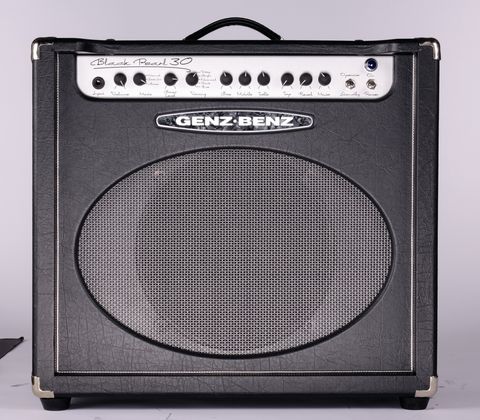 The Black Pearl 30 is a versatile, compact package that's equally valid onstage or in the studio; just don't expect it to perform in the same way that your traditional twin-channel amplifier does.

The Genz Benz in all its glory.

The voicings helps find the best match for your guitar.

High profile Stateside, Genz-Benz enjoys more of a niche appeal on these shores, often perceived as specialising in amplifiers with more switches and dials than the cockpit of a Boeing.

The new Black Pearl range looks set to deliver juicy power-stage overdrive with aplomb. Available as a head and cab, 2x12 combo and the 1x12 combo configuration here, the Black Pearl 30s all feature a quartet of EL84s with variable power settings and a single channel with a footswitchable boost function and reverb.

Cosmetically, the Black Pearl 30 is a departure from Genz-Benz's ultramodern El Diablo range. Faux-handwritten decals on the recessed front panel contribute to what seems a conscious effort to evoke a boutique vibe, while the cabinet's 13-ply Baltic birch is covered by black Tolex and chrome Fender-style corner protectors, a combination that should prove to be fairly robust.

There's certainly a feeling that an amplifier like this is much more practical in real-world scenarios than a 100-watt head, not merely because of the compact portability of the cabinet, but also due to the Black Pearl's variable power settings.

Around the back, alongside a fan switch and 6.4mm jack sockets for the boost footswitch, serial effects loop, speaker outputs and speaker-compensated line out, reside a pair of two-position switches that control the power mode.

Furthest right, the four tubes/two tubes toggle is fairly self-explanatory, defeating a pair of EL84s to deliver a nominal 15-watt performance. The pentode/triode toggle can then take the output down to around eight watts in a triode mode that promises increased saturation, compression and a slightly darker sonic signature.

This adds a great deal of versatility to the amplifier in terms of its use in different scenarios. At a gig, for example, you could take advantage of the extra headroom delivered by running the amp on full power, perhaps switching to half-power mode for rehearsal, and triode mode for achieving optimum saturation at lower volumes in the studio.

The Black Pearl's Eminence Red Fang Alnico 12-inch driver will be less familiar to players on these shores used to encountering Celestions in the majority of backlines, but Genz-Benz feel that they offer the perfect balance of warmth, brightness and midrange musicality when used in combination with this amplifier.

Should you require extra spread, a pair of speaker jacks and an impedance selector switch will allow you to utilise your cabinet of choice in most cases.

Back to the front, as it were, it's good to see that Genz-Benz has added some individuality to what could easily have been a bog-standard equalisation section.

Along with a passive three-band EQ, there's a five-position voicing control that provides additional tone-sculpting, and also influences the level of preamp gain available.

Between thick, dark, natural, bright and deep settings, you should find something that accentuates and complements the natural character of your instrument.

The boost and volume controls are also interactive; with the volume set low, the boost level when wound up acts more like a traditional level boost, while with the volume cranked it adds much more gain to the signal.

Powering up the Black Pearl, you're greeted by a cool blue jewel light and the whir of the built-in fan. This isn't particularly intrusive in a band or home practice scenario, but in any case there's a switch on the rear panel that allows it to be defeated, should it become an irritant when recording.

This is particularly relevant if you like to record open-back combos such as this with a microphone around the back as well as one trained on the speaker cone.

Even with the triode and half-power settings engaged, with the volume and master set around noon and the boost switched off, there's a loud, three-dimensional, dynamic clean voice which really allows the character of your guitar to come to the fore.

Natural is probably the favourite voicing in this context, but the bright setting is well judged too, avoiding the ice-pick syndrome and allowing you to extract singing highs from neck pickups with a Blackface Fender-style flavour.

Despite the presence of a quartet of EL84s, the Black Pearl can't quite ape an AC30 convincingly; there's always something a little transatlantic and Fender-like in there somewhere, although that's not necessarily a bad thing.

Unlike many amp reverb circuits, it's only after 12 o'clock that the presence of the Accutronics Long Pan unit really makes itself noticed with anything more than a subtle colouration. Even at extreme settings, it's not too over the top, in contrast to many amplifiers with reverb circuits that are largely unusable above the halfway point.

Taming the reverb and engaging the boost delivers a bright, punchy overdrive sound that's great for Townshend-style chordal aggression and biting SRV blues phrases, and really rewarding when you dig in with your picking hand. If it's a little too bright for you, or perhaps your guitar, revert to the natural voicing to tame that top end.

With a PAF-style bridge humbucker, adding preamp volume here increases the overdrive saturation as promised up to something that's approximately equivalent to seventies hard rock and nineties alternative rock levels of drive, although in the case of the latter think Pearl Jam's valve crunch rather than Nirvana's silicone diode-driven sound.

Revving up the middle control adds further boost and a mid-range bite that's more raucous and reminiscent of a classic Marshall overdrive - think AC/DC's Back In Black.

Short of modern metal or shred styles, most players will find this to be more than enough gain, and it's always worth remembering that most of your favourite recorded guitar tones have much less dirt than you think they have.

The Black Pearl's front panel controls are extremely interactive, and the rear panel power settings also play a huge part in the sound.

The downside of this interaction for some players is that it means that unlike an amplifier with two independent channels, you can't footswitch between pristine clean and full-on dirt. You have to find a balance, or rely on a pedal for your most extreme sound.