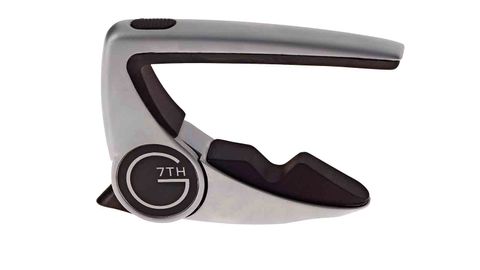 Hard to say anything other than in its second generation, the Performance is probably the best capo there is.

Not all accessories are created equal: we take a look at the latest iteration of G7th's much-loved Performance capo.

Once upon a time, the humble capo was seen as an aide to the guitarist of lesser capability, sneered at by serious players.

In some quarters, that may still be true, but as open and altered tunings have gone mainstream over the past decades, the capo for many acoustic and electric players has become as important as, and often more than, a pick or slide.

British company G7th has done plenty to enhance the capo's reputation. Its original Performance capo, with its hand-clamp-and-stay-put action - initially a little unnerving - has made many a player leave their beloved Shubbs in their spares box.

For some, however, weight was an issue, especially for lightly built acoustics, where using it to capo in lower positions could tip the instrument's balance enough to feel slightly uncomfortable.

The new 2014-released Performance 2, however, falls in line weight-wise with G7th's more Shubb-like Nashville range, but still retains the original easy-clamp locking system, apparently slightly improved; most noticeably, the release lever is smaller, and contoured, in order to be an easier push release for your fretting-hand thumb.

It seems just as efficient as the original, but that weight issue is now absent with any light-build guitars we had to hand. So long as you place it close behind the fret, it works 100 per cent, with that improved release button seeming to speed up position changes, too.

If you use capos as part of your practice or performance, G7th should be on your radar. A very intelligent design has just got more savvy.