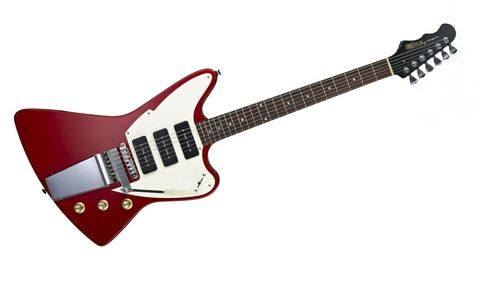 Okay, Wilkinson snaffled some cute design cues from the old non-reverse Firebird, but the Esprit III has a sound and feel of its own.

The latest addition to Trev Wilkinson's intermediate Fret-King Black Label Series is a beautiful take on a 60s classic, dubbed the Espirit III.

The guitar is fitted with Trev's Vari-coil control, which enables you to dial out a proportion of each pickup's windings to reduce the output of the WP90 single coils and pull single coil-like tones from humbuckers. Let's take a closer look.

You don't have to be a crime scene investigator to detect a trace of Gibson Firebird/Explorer DNA on the Esprit III. We're talking specifically about the non-reverse 'birds that flew out of the old Gibson factory in Kalamazoo, Michigan between 1965 and 1969.

The Esprit III is not a direct copy, though. With its altered profile, the three-piece agathis body is a fair bit deeper than that of the 60s 'birds, giving this guitar a robust feel when it's hanging from a strap.

The Esprit's gloriously deep yet supremely comfortable D-profile neck is glued to the body and topped with a rosewood fingerboard studded with 22 medium jumbo frets. The 'board's 254mm (10- inch) PRS-standard radius puts it between the feel of a modern Fender (241mm/9.5 inches) and a Les Paul (305mm/12 inches).

The power trio of Wilkinson WP90 single coils are stacked to reduce hum and, as with the other two guitars in this review, wired to a five-way lever pickup selector switch, a master volume, master tone and Trev's smart Vari-coil control.

The icing on the Esprit III's cake is the Gibson Maestro Vibrola-style vibrato unit, aligned with a chunky chrome Wilkinson bridge with six roller saddles to help with tuning stability.

Wilkinson's take on the classic P-90 has found the perfect home on the Esprit III. The bridge unit sparkles when clean and roars when overdriven. The in-between positions work great for blues noodling and sweet slide phrases, and we love the unexpected psychotic reaction of the middle position, especially in conjunction with some nasty germanium-fuelled fuzz.

The Vari-coil adds some interesting tonal options to an already highly versatile guitar. Notorious plank swapper Mike Campbell of Tom Petty And The Heartbreakers could play a whole gig with the Esprit III...

Trevor Wilkinson doesn't so much reinvent the wheel as give it a retread, whack on some shiny rims and then make sure it handles as good as possible. It's an approach that's working. Some of the best affordable new guitars that have been through our hands in the past year or so have had the Fret-King name etched on their headstocks.

We can now welcome the Esprit III to our good books. It scores big in looks, tonal range and playability. In other words, if you haven't done so already, the time has come to see what all the fuss is about.