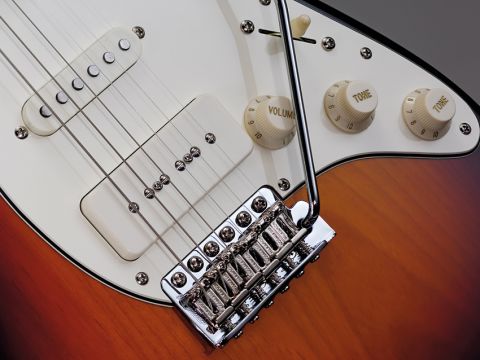 It won't half face some stiff competition from mid-price Fenders but the versatility injected by the P-90 should help the Corona SP win some fans.

That squiggly scratchplate and bat-wing headstock shouldn't fool anyone.

The Corona SP is obviously based on the Fender Stratocaster, and the name is a cheeky reference to the current location of the Fender factory in California. If you're going to 'pay tribute' to any guitar, it might as well be the biggest selling one ever, and the double-cutaway alder body and bolt-on maple neck design copped from the original model are of course well-proven tone generators.

"Those craving some beef in the bridge position without resorting to a full-blown humbucker will appreciate the fatness of the bridge soapbar."

Fender has pumped so many variations of the Strat into the mid-range sector that Wilkinson has had to think outside the box with the Corona SP. In place of either a SSS or HSS pickup layout, Wilkinson has plumped for single-coils in the neck and middle positions and a P-90 in the bridge position.

Fitted to Gibson Les Paul models in the '50s, the P-90 is tonal Viagra for your eardrums; a fat single-coil with a tonality that owns the middle ground between a classic Strat single-coil and a vintage output humbucker.

If you're a P-90 virgin with worrying tales of the pickup's reputation for horrible hum-generation ringing in your ears, rest easy. The Wilkinson version has a stacked format that's designed to reduce hum.

Like the other guitars in the Black Label series, the Corona SP has a
Vari-Coil control that lives on the same plate as a master volume, master tone control and five-way pickup selector lever switch. In this case, the Vari-Coil provides a fat tone that befits the P-90 name and the glassier character of a Stratocaster single-coil.

The slim profile bolt-on neck features 22 medium jumbo frets and 254mm radius rosewood fingerboard. The Wilkinson tuners have staggered posts to do away with the need for such friction-causing gremlins as string trees; we'll see how well that setup works when we start manipulating the whammy bar.

While the Corona SP's neck and middle pickups pump out all the glassy Stevie Ray and Jimi tones you could possibly want, those of you craving some beef in the bridge position without resorting to a full-blown humbucker will appreciate the fatness of the bridge soapbar.

Remember, you can wind the pickup back to a lower output single-coil voice, making this set-up superbly versatile. There's no doubt that the Corona SP faces competition from the real deal, which Fender is offering in a staggering number of variations at the moment, but the P-90 should help swing some votes.

The Vari-Coil control is excellent, too. Sweep through it and you realise how subtle differences between single-coils' and humbuckers' tonality and tonality can be.

We like that a rolling coil-split control offers more sonic variation than a simple toggle switch - try hitting a note in the single-coil mode before gently turning up the Vari-Coil to fatten the note as it begins to fade.

Using such a well-established templates makes the Corona SP feel familiar. But that's kind of missing the point - by maintaining focus on the quality of raw materials and build, while enhancing playability and tonal versatility, Trevor Wilkinson has brought a high-grade offering to the table - one that you won't regret giving an audition to.